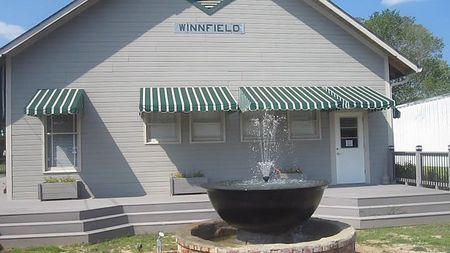 The Louisiana Political Museum and Hall of Fame in Winnfield, Louisiana, was created in 1987 by an act of the state legislature to highlight the careers of the state's leading politicians and political journalists. Because three governors, Huey P. Long Jr., Oscar Kelly Allen, and Earl Kemp Long, were born there Winnfield calls itself "the birthplace of Louisiana politics."[1] The museum, which opened in August 1993 on the centennial of Huey Long's birth, is located at 499 East Main Street in a restored Louisiana and Arkansas Railroad depot. Until his death in 2011, each inductee was sketched by the former Shreveport Times cartoonist Preston Allen "Pap" Dean Jr., himself one of the original thirteen honorees.[1]

Large displays are accorded for the two Governors Long, with sculptures of each man shown speaking to voters. Recording of Long political speeches are sometimes played as visitors examine the political past. Other Long family members inducted into the Hall of Fame include the late U.S. Senator Russell Long, former U.S. Representatives Speedy Long and Gillis Long, former state Representative Jimmy D. Long of Natchitoches, and on February 1, 2014, Rose McConnell Long, Huey's wife. Zachary Taylor, the only U.S. President from Louisiana (though he was born in Virginia), was inducted in 1995.[1]

As of 2014, nearly 160 have been inducted or were awaiting induction into the Hall of Fame, mostly Democrats. The Republicans have less representation in the hall of fame, presumably the result of the Democrats' past domination of the state. A handful of the inductees carry no partisan affiliation. Republican honorees include former Governors David C. Treen, Murphy James Foster Jr., and Buddy Roemer, former U.S. Representatives William Henson Moore, Richard Baker, and Bob Livingston, former gubernatorial candidates Charlton Lyons and Francis Grevemberg, former Louisiana Secretaries of State Wade O. Martin, Jr., and Walter Fox McKeithen, and Charles and Virginia de Gravelles, party pioneers from Lafayette who were Louisiana state Republican chairman and national committeewoman, respectively, during the 1960s.

All recent U.S. senators have been inducted except for three Republicans, David Vitter, Bill Cassidy, who seeks reelection to a second term in 2020, and John Neely Kennedy who defeated in the 2016 general election the Democrat, Foster Lonnie Campbell, Jr., a hall of fame inductee. However, Vitter's principal 2004 opponent for the Senate, former U.S. Representative Christopher "Chris" John, has been inducted into the hall of fame. The Democrat who defeated Vitter for governor, John Bel Edwards, was inducted while he was a state representative for Tangipahoa Parish. His induction came with other Edwards family members who had political careers. The nominees are chosen by a statewide panel of political historians and writers. Each inductee is given his own display, which included a caricature by Pap Dean to those inducted prior to Dean's death.[2]