Martha Washington as a young woman

Martha Dandridge Custis Washington (June 2, 1731 - Mount Vernon, May 22, 1802) was the wife of George Washington and the first First Lady of the United States of America. She was not known as "First Lady" though, but was often addressed as either "Lady Washington" or "our Lady Presidentess".[1]

Martha Dandridge was born on June 2, 1731 to John and Frances Jones Dandridge on their plantation, Chestnut Grove, located in New Kent County, Virginia. The Dandridges maintained a comfortable but not extravagant lifestyle on their five-hundred acre estate and were considered minor gentry. They eventually owned between 15 and 20 slaves.[2]

Martha was the eldest child, and had three brothers and four sisters, as well as an illegitimate half-sister who was a slave.[3] Martha was taught all the usual subjects young ladies learned during the time period: music, sewing and home management, as well as reading and writing. However, her later decisions and actions while managing her husbands' estates possibly show a more extensive education.[3] She was fond of reading and needlework throughout her lifetime.

Martha Dandridge was baptized at an early age into the Anglican faith, and attended the nearby St. Peter's Church, where she met her first husband. She read various devotional works as well as spending some time almost every day reading either the Bible or the Book of Common Prayers.

Martha Dandridge married Colonel Daniel Parke Custis, a man twenty years her senior, on May 15, 1750. Custis was the heir of one of the richest men in Virginia. His father, John Custis IV, initially refused to sanction the marriage, and threatened to disinherit his son, on the grounds that Martha's family was neither wealthy enough nor of high enough social standing. Friends intervened on their behalf, and Martha acted as well, arranging a meeting with the elder Custis. After this meeting, Custis declared her "beautifull & sweet temper’d" and permitted the marriage to take place.[4] The couple lived in his father's Pumunkey River mansion, "White House", where Custis managed the plantation for his father.[5] They had four children: Daniel Parke Custis, Jr. (November 19, 1751 – February 19, 1754), Frances Parke Custis (April 12, 1753 – April 1, 1757), John "Jacky" Parke Custis (November 27, 1754 – November 5, 1781) and Martha "Patsy" Parke Custis (1756 – June 19, 1773). A stipulation in John Custis's will required that in order to inherit part of the estate, any children had to have "Parke" included in their name.[6]

Colonel Custis died intestate (without a will) on July 8, 1757.[3] Because he didn't name an executor in a will, Martha assumed management of the estate, which consisted of thousands of acres of land, as well as nearly 300 slaves. She received a "widow's portion", consisting of one-third of the estate, which was hers to use during her lifetime. The remaining two-thirds was to be divided between their children after reaching adulthood.[7] 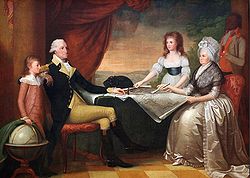 Martha was a 26-year-old, wealthy widow with two small children when she met George Washington in March 1758.[8] They married on January 6, 1759 and moved, along with Jacky and Patsy, to Mount Vernon, the plantation he inherited from his half-brother's widow, in April of that year.[5]

Martha was very involved in the day-to-day operations of Mount Vernon, including overseeing the staff and slaves, harvests and food preparation and storage.[3] She and Washington had no children of their own, but he was an affectionate and attentive stepfather to Jacky and Patsy, and he managed the Custis estate carefully for them.

Due to their social prominence, the Washingtons entertained a large number of visitors and overnight guests at Mount Vernon. Martha was known as a warm and thoughtful hostess, who provided a welcoming setting for their company. After-dinner entertainment often consisted of her children playing various musical instruments, dancing and cards (for the gentlemen).[9]

Patsy Custis began having seizures around age 12, which grew steadily worse. Doctors were unable to treat her condition, and she died at 17 after a seizure on June 19, 1773.[10]

Jacky did not excel at school. To prepare him for college, he was sent to a boarding school in 1768, where he became interested in a young lady named Eleanor Calvert. The young couple became engaged, but Washington insisted on college before marriage. Jacky went to Kings College (now Columbia University), but soon returned home to marry the 16-year-old Eleanor on February 3, 1774.[10]

During their marriage, Jacky and Eleanor split their time between Mount Vernon and Eleanor's family's home, Mount Airy, in Maryland. They had four children before Jacky's death on November 5, 1781[10] of "camp fever". Jacky had joined Washington the month before at the siege at Yorktown as a civilian aide.[11]

Portrait of Martha Washington (1878) by Eliphalet Frazer Andrews; this posthumous portrait was based on a Gilbert Stuart original portrait of Mrs. Washington; White House art collection.

The Washingtons returned to their home at Mount Vernon on March 15, 1797. Martha confided to an old friend, "I cannot tell you, My dear friend, how much I enjoy home after having been deprived of one so long, for our dwelling in New York and Philadelphia was not home, only a sojourning. The General and I feel like children just released from school or from a hard taskmaster, and we believe that nothing can tempt us to leave the sacred roof-tree again, except on private business or pleasure."[13] President John Adams appointed Washington to be Commander-in-Chief of the Provisional Army on May 3, 1798, due to rising tensions between the U.S. and France. War was avoided, however, and Washington was able to remain at Mount Vernon.[13]

George Washington died on December 14, 1799. Martha closed up their bedroom at Mount Vernon, moving into a third-floor bedroom, and would appear in public in full mourning.[14] Her health began to fail, and Martha passed away on May 22, 1802. They are both buried at Mount Vernon.[5]