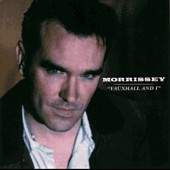 He is most famously identified with the 1980s rock band The Smiths, as their lead vocalist and lyricist. Morrissey, also called Moz, began a successful solo career in 1987 after the Smiths disbanded.

Morrissey is famous for the deep affection he inspires in his devoted fans. His concerts often feature fans storming the stage to embrace him or just hold his hand.

Morrissey is also an outspoken supporter of People for the Ethical Treatment of Animals (PETA).

In November 2017, Morrissey stated that he would kill U.S. President Donald Trump "for the safety of humanity" if he were able to.[1][2] In 2019, Morrissey revealed he supported the right-wing party For Britain.[3]