Nara Japanese city and prefecture. Nara was an ancient capital of Japan; the first permanent capital was established in the year 710 at Heijo, now known as Nara. It is located in the Kinai plain, near Kyoto.

Nara was the glorious capital, "like a fragrant flower in full bloom," as an ancient poet once described it. Nara was the cradle of the great Japanese arts and the essence of culture in the long-ago Tempyo Period. The old, world-famous temples and shrines of the province of Yamato (presently Nara Prefecture) have handed down to us their precious history.[1]

Nara is considered the birthplace of the culture of Japan. The Todaiji Temple at Nara is one of the Japan's most famous and historically significant temples. It enshrines a gigantic bronze statue of Buddha, the biggest in Japan. (The second biggest one is in Kamakura) 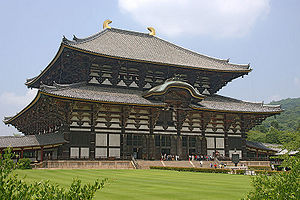