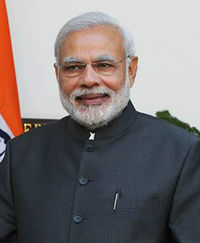 Narendra Modi (born 17 September 1950) is the conservative Prime Minister of India. He has served in the position since 2014, when he won a historic landslide election[1] in which his party received more votes than any other party in the world had ever received in history.[2] He served as the Chief Minister of the Indian state of Gujarat from 2001 to 2014. In 2017, his party, the conservative BJP, won another astounding victory, giving the party complete political control over India.[3][4] While not having a Christian foundation as a Hindu, he has taken more conservative and free market political positions.[5] Narendra Modi also has close ties with Christian Conservative Jair Bolsonaro, the President of Brazil.[6] He is a member of the Hindu nationalist[7] Bharatiya Janata Party.[8] He has called for population control.[9]

One of his most notable decisions as Prime Minister was to declare worthless 500–1000 Rupee notes in order to combat the black market.[10] Another notable decision was his revocation of Articles 35a and 370 in Jammu and Kashmir in 2019. [11][12]

Both the mainstream media[13] and the conservative media have[14] compared Modi and his policies to United States President Donald Trump. He has also been compared to the earlier U.S. President Ronald Reagan.[15] In November 2019, Modi pulled out of a proposed multilateral trade treaty with other Asian countries as it was not in India's interests.[16] In December 2019, India's parliament passed a bill giving citizenship to religious minorities from Muslim-majority countries that sought refuge in India.[17]

Modi faced a difficult re-election campaign in 2019,[19] but cruised to a landslide victory, winning even more seats[20] than before the election.[21]

On September 22, 2019, an event was held between India and the United States, specifically between Modi and U.S. President Donald Trump, titled "Howdy Modi!" During this meeting, Sylvester Turner the Mayor of Houston, Texas handed PM Modi the Key to the City. 70,000 Americans, including many Indian-Americans, were present, and the two leaders discussed pertinent issues, such as terrorism, Iran, and Pakistan.[22]