The only ideological feature that maintains the party since its foundation is nationalism; their social and economic policies have varied in different periods. Economically the party was already capitalist and socialist, currently being protectionist. Socially, the party has been conservative and progressive, currently being moderate. Marine Le Pen, its leader, supports abortion. Under the management of Marine Le Pen, the party became less radical nationalist, and all its Nazi, fascist and anti-Semite members were expelled. The party has reached out to French Jews,[2] and it has seen increasing support from the military and police.[3]

The National Front won the most seats of any French political party in the European Parliament in May 2014.[4] 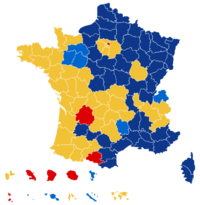 Le Pen ran in the 2017 presidential election, her second presidential election in a row. United States President Donald Trump called her the strongest of the presidential candidates, particularly on borders and security.[5] British politician and radio talk show host Nigel Farage endorsed Le Pen.[6] By contrast, former U.S. President Barack Obama spoke with pro-EU candidate Emmanuel Macron,[7] who stated that terrorism would be "part of our daily lives for the years to come."[8] After the first round, Obama explicitly endorsed Macron's candidacy.[9]

Left-wing opponents of Le Pen stated that even before the election, Le Pen made a large impact, shifting the political debate in France to the right.[10]

Le Pen received second place in the first round of the election on April 23 with over 21% of the vote, meaning she advanced to the second round to face Macron.[11][12]

Le Pen chose conservative nationalist Nicolas Dupont-Aignan, the president of the political party France Arise, to be her prime minister if elected.[13][14]

Although Le Pen lost the election with just under 34% of the vote, the election was a victory for her in a sense as it showed that she, her party, and their ideas had entered and were influencing the French mainstream.[15] Soon after the election, it was revealed that even if Le Pen had won, the liberal elite in France would have taken steps to keep her from actually welding power.[16]

In the 2019 European Parliament elections, the National Rally once again became the largest party in France.[17]