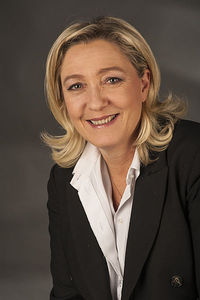 Marine Le Pen (August 5, 1968) is a Euroskeptic French politician and formally the chairman of the National Rally. She has run twice to be French president, and although unsuccessful both times, she received high percentages of the vote for a nationalist candidate. As of 2022, she is a leader of the Majority Opposition bloc in the French National Assembly to the corrupt globalist regime of Emmanuel Macron.

As the nominee in 2017 for President of France, she won 34% of the vote in the election. After the election, she changed the Cold War-era name of the Front National to the less militant sounding National Rally. She has similarities to Donald Trump in standing up against the Establishment and putting her country first.

In 2015 as president of the party, Marine fired her father Jean-Marie Le Pen, the founder of the FN from any position or leadership. She has led a movement of "de-demonization of the Front National" with renovated positions and new ideas, purging members accused of Petainism, racism, and antisemitism. Marshall Petain, a hero of the First World War, headed the unoccupied, fascist Vichy regime during the Second World War.

In November 2022 Le Pen stepped down as the head of National Rally.

Ms. Le Pen was born on 5 August 1968. She graduated with a lawyer's diploma in 1992 and from 1998 to 2004 lead the legal service of the FN. From 2000 onwards she was a member of the political bureau of the FN, and in the 2003 FN congress in Nice, was elected as one of the 8 vice-presidents. In 2007, she was the strategy advisor for the presidential campaign of Mr. Le Pen in the 2007 French presidential elections.

In 2003 she became the chairwoman of the Generations Le Pen organization, a youth organization of the FN to promote the thought and works of Jean-Marie Le Pen. Polling data 6 weeks prior to the April 2017 French elections.
Source:Vox Le Pen ran again in the 2017 presidential election. United States President Donald Trump called her the strongest of the presidential candidates, particularly on borders and security.[1] British politician and radio talk show host Nigel Farage endorsed Le Pen.[2] By contrast, former U.S. President Barack Obama spoke with pro-EU candidate Emmanuel Macron,[3] who stated that terrorism would be "part of our daily lives for the years to come."[4] After the first round, Obama explicitly endorsed Macron's candidacy.[5]

Left-wing opponents of Le Pen stated that even before the election, Le Pen made a large impact, shifting the political debate in France to the right.[6]

Le Pen received second place in the first round of the election on April 23 with over 21% of the vote, meaning she advanced to the second round to face Macron.[7][8][9]

Le Pen chose conservative nationalist Nicolas Dupont-Aignan, the president of the political party France Arise, to be her prime minister if elected.[10][11]

Although Le Pen lost the election with just under 34% of the vote, the election was a victory for her in a sense as it showed that she, her party, and their ideas had entered and were influencing the French mainstream.[12] Soon after the election, it was revealed that even if Le Pen had won, the liberal elite in France would have taken steps to keep her from actually welding power.[13]

She lost to Macron again.

Le Pen prioritizes the national interests of France, a rejection of globalism, an exit from the eurozone, a reduction of immigration, and an increase in security, as well as socioeconomic issues and the sovereignty of the French state, on matters of currency, borders, the economy, and the rule of law.

Le Pen has expressed that her party has always been Zionistic and always defended Israel's right to exist. Still, she opposed the settlement enterprise, wants French Jews to give up Israeli citizenship – but only because of her support for French national unity – and criticized U.S. President Trump's decision to withdraw from the Iran nuclear deal.[14][15]

Le Pen blasted the EU's racist foreign minister Josep Borrell's threat to 'annihilate' the Russian army, and drag France into a war with Russia against France's sovereign will.[17]

Ms. Le Pen has been the target of violence - although not directed at her alone, the Le Pen family was a target when Mr. Le Pen's home in Paris was bombed in 1976. In the June 2007 legislative elections following the announcement of her 42% showing, some youths decided to attack her car with projectiles. They have been brought to court for this behavior. More recently, she was aggressed on 23 September 2007 by 2 youths with a gun, and they fired a shot. Fortunately, she was evacuated by her bodyguard, and the youths have been identified, and have been deported from the Nord-Pas-De-Calais department.

Facebook suspended 30,000 accounts in France a mere ten days before its national election in 2017, in censorship of supporters of Marine Le Pen.[19][20]