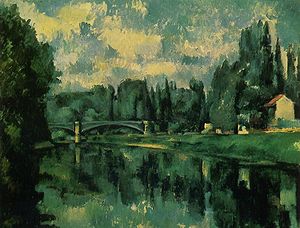 A masterpiece by French impressionist Paul Cézanne has been bought for a record $16.2 million by the Art Gallery of NSW, in its most ambitious purchase ever.

Originally, New South Wales included the whole of the Australian mainland east of the 133th meridian east, which was extended to the 129th meridian east in 1826. the other states were gradually separated from New South Wales. New colonies were founded in Hobart, Brisbane, Adelaide and Melbourne, and so sections of New South Wales were carved out to be administered by the new colonies as Van Diemen's Land (later renamed Tasmania), Queensland, South Australia and Victoria, respectively. The Northern Territory was also established as a separate colony, but was annexed by South Australia. Modern day New South Wales is the fourth largest of Australia's six states.

The current boundaries of the state are with Victoria to the south, South Australia to the west and Queensland to the north. It also completely surrounds the Australian Capital Territory and the land side of the Jervis Bay Territory.

New South Wales has its own bicameral parliament with a lower house (the New South Wales Legislative Assembly) and an upper house (the New South Wales Legislative Council). The lower house has 93 members representing each of the 93 single member-electoral districts, a format similar to that of the Australian House of Representatives. The upper house has 42 members elected on the basis of proportional representation. Like the Australian Senate, it has more members from minor parties.

The NSW ALP branch lost power in 2011 in a landslide victory for the Liberal-National coalition, with a swing of over 16.5%. Foreshadowing their upcoming defeat in the federal election. There have been four premiers in as many years. On 3 December 2009 Kristina Keneally was elected leader of the Labour Party and ultimately premier, beating Nathan Rees who himself succeeded Morris Iemma after he resigned when his bill to privatize the states electricity was rejected by the majority of delegates within his own party.[1] She is the first American-born Austrian and the first woman to hold that position. Recent polls have placed her party at low levels—in some case close to 25% on primary votes.[2][3]

The NSW economy is worth $359.9 billion per year,[4] representing less than one third of Australia's total.

A recent study has labelled the economy of NSW the worst in the country, having grown at only 0.2% compared to the national average of 1.1%. The region's share of the national economy has fallen from 36% during the 2000 Sydney Olympics to 32% in June, 2009 [5]

The economy has been heavily impacted by the Labor Parties instability, continually changing leadership and high taxes.[6]