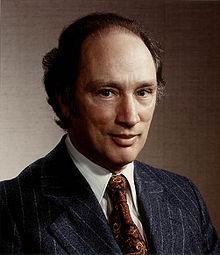 Trudeau, leader of the Liberal Party, is best known for sponsoring the Canadian Charter of Rights and Freedoms, repatriating the Canadian constitution so that Britain lost its last remaining control over Canada, his anti-American foreign policy, his failed efforts to seize federal control of Alberta's oil riches, and his aggressive defeat of Quebec separatist terrorism by the War Measures Act during the October Crisis in 1970. He strongly endorsed Canadian nationalism and fought the secessionist elements in Quebec, but to do that he angered much of English speaking Canada. His energy policies angered the Prairie Provinces, especially Alberta, permanently weakening his party there. In terms of American conservatism and liberalism, his Liberal Party contained both conservative and liberal elements; his policies generally were hostile to conservative positions.

Trudeau was born October 18, 1919 in Montreal, which was his lifetime base. He was the son of a wealthy businessman Charles-Emile Trudeau and Grace Elliot. The father was the son of an ambitious farmer; the mother came from an English-speaking Scotch Protestant family of Loyalist descent, but she had been raised Catholic. Bilingual from an early age, the son was educated in French-language Jesuit schools, and was a devout Catholic all his life. The brilliant student attended the Université de Montréal, Harvard University, Université de Paris and the London School of Economics. Before entering politics, he was a lawyer, primarily interested in public affairs; he worked as a legal adviser to trade unions and was closely involved in the 1949 strike of asbestos miners. He also taught law at the Université de Montréal.

He gained renown for his work in the field of civil liberties when Quebec was governed by the conservative-leaning Union Nationale government of Maurice Duplessis (1944-1959). He helped the provincial Liberals win in Quebec in 1960, but then turned away from their growing nationalist orientation. Trudeau was always a strong advocate of the Canadian federal system, and repeatedly opposed all efforts to strengthen the provinces at the expense of the national government in Ottawa. He campaigned against the Liberals in the 1963 federal election for the moderately socialist New Democratic Party. Meanwhile, the "Quiet Revolution" was transforming and modernizing Quebec, advancing a secularist ideology and freeing the province from the long-time control of English-speaking businessmen and the Catholic Church.

In 1965, Trudeau along with Gérard Pelletier and Jean Marchand rejoined the national Liberal Party with the stated purpose of reforming it from within. The three quickly became the leading French-Canadians in the national Liberal organization. He was first elected to the Canadian House of Commons in 1965, and repeatedly reelected until his retirement from politics in 1984. Almost immediately the young and charismatic Trudeau was seen as a Liberal Party star and he was made Justice Minister in 1967. Working with Prime Minister Lester Pearson,[1] he became the chief government spokesman against the efforts of Quebec's premier, Daniel Johnson,[2] to claim special status for the province. Trudeau argued for strong but equal provinces and equal French and English language rights throughout Canada. Quebec separatism was growing, and was incited by French President Charles de Gaulle, who cried the separatist slogan "Vive le Québec libre" to a crowd in Montréal; Pearson issued an official rebuke and de Gaulle promptly went home, as Trudeau tried to staunch the damage.

After Pearson retired in late 1967 Trudeau was elected Liberal leader and riding a wave of "Trudeaumania", became Prime Minister on April 19, 1968. He immediately called for elections, campaigning for "one united Canada" against the opposition Conservatives, who favored a special accommodation with Quebec. He won a firm majority, with strong representation across Canada.

During his first 4 years in power Trudeau faced several politically volatile situations. The most dramatic was his facing down a home grown terrorist threat of the far-Left Front de Liberation du Québec (or the FLQ). For several years separatist desires were rising in the predominantly French-speaking province, and the FLQ tried to remove Quebec from Canada by force. In October 1970, Trudeau invoked the War Measures Act. This gave the state broad powers of arrest and detention in a time of crisis. When asked how far and how long he would take the measures, Trudeau famously replied "Just watch me".

On October 16, 1970 the Trudeau Cabinet passed the War Measures Act and Regulations (WMA) which immediately sent the Canadian army into Montreal. The army summarily dragged 497 people out of their beds and into jail. Of these, 435 were released within two days, while 62 were charged and 32 held without bail. There was near-unanimous public support for these drastic measures at the time.

Although the FLQ kidnappings would end with the death of Quebec cabinet minister Pierre Laporte, the FLQ had its back broken by military presence in the province who arrested a handful of radicals. The general public overwhelmingly supported the emergency powers and the presence of the military in Quebec. When the crisis was over, Trudeau revoked the powers of the War Measures Act.

The Trudeau government was little interested in economic growth, and allowed prosperity to give way to stagnation and recession as unemployment and inflation proved intractable. Trudeau was reelected with only a minority government in the 1972 election, in part because of a slowing economy. In the 1974 election Trudeau won a majority, after ridiculing Conservative economic policies, which he had to adopt himself a year later. The economy performed poorly through the late 1970s and Trudeau lost his first general election to the Conservatives in 1979 under the Joe Clark[3] Clark's minority government tried to privatize Petro Canada, but soon lost a no-confidence vote.

In foreign policy Trudeau went out of his way to antagonize Americans; he distrusted NATO and he and Nixon hated each other. Canada did not have the power to shape its own foreign policy, but he could antagonize the Americans by, for example, being friendly toward Moscow or shouting "Viva Castro!" in Havana. He gave only muted disapproval of Soviet atrocities regarding the invasions of Czechoslovakia (1968) and Afghanistan (1979), the suppression of Solidarity in Poland in 1981, and the shooting down of the Korean airliner in 1983.[4]

The Trudeau years were especially difficult for the armed forces. Bilingualism strained good will; management skills displaced combat leadership as criteria for promotion. Budget freezes and inflation prevented the modernization of weapon systems, and lowered the prestige of Canada in NATO. Trudeau at first decided, against internal opposition, to reduce Canadian forces in NATO stationed in Europe; he later warmed up to NATO. Trudeau cared little for the military, and the opposition did not exploit his failures.[5]

In 1980 Trudeau won a majority, easily defeating Conservative Joe Clark. In 1982, Quebec voters narrowly rejected a separatist "sovereignty-association" option, but many expected that sooner or later the province would vote for independence from Canada. To head this off, Trudeau engineered changes in the federal constitution, ending the role of the British government in amending the constitution. Trudeau successfully mobilized Canada's major interest groups in support of a Charter of Rights and Freedoms—something like the American Bill of Rights. He persuaded all the to accept the new constitution, except for Quebec, which refused its assent. Frustrated, Trudeau resigned both the premiership and party leadership in June 1984.

In 1969 Trudeau legalized abortion if so approved by a hospital board. However the Supreme Court in 1984 claimed that the requirement for a board to approve violated a woman's rights, and so now there are no legal restriction on abortions.

In economic policy his goal was to use the riches of Alberta oil to fund national programs, despite the vehement objections of the Albertans. His National Energy Program caused a bitter dispute over the nationalization of oil companies, to increase Canadian control and generate federal revenues from the energy sector. Petro Canada was founded as a Crown Corporation, although the Canadian government has since sold its stake in the company.

Trudeau retired from politics on June 30, 1984 and was succeeded by John Turner.

Late in life (1971) he married Margaret Sinclair, a young playgirl thirty years his junior. They were incompatible, for her image of Trudeau-as-romantic-playboy was based entirely on false media hype; he was actually a workaholic and an intense intellectual with little time for family or fun. After three children were born they separated in 1977 and were finally divorced in 1980.

Trudeau remained active in law until late in his life and passed away on September 28, 2000 at the age of 80. His son, Justin Trudeau, now heads the Liberal Party and became Prime Minister in the 2015 Canadian federal election.

Candians outside Quebec hail Trudeau as the chief sponsor of the Canadian Charter of Rights and Freedoms. Liberal partisans fondly remember Trudeau as a dashing hero. Conservatives still complain about his poor administrative practices and bad economic policies, as well as his personal arrogance and disregard of the needs of the west. Trudeau's policy of bilingualism in the civil service led to continuing resentment in English-speaking Canada. However, he is admired for facing down the Quebec separatists and keeping Canada united.