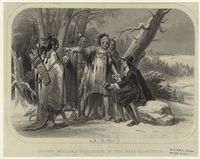 Roger Williams (1603-1683) was the founder of the colony of Rhode Island and a promoter of a strict separation between church and state. He opposed any preference by government of one religion over another, or any interference by a magistrate into religious matters.

Williams was a staunch advocate of separation of church and state. He was convinced that civil government had no basis for meddling in matters of religious belief. He declared that the state should concern itself only with matters of civil order, not with religious belief, and he rejected any attempt by civil authorities to enforce the "first Table" of the Ten Commandments, those commandments that deal with an individual's relationship with and belief in God. Williams believed that the state must confine itself to the commandments dealing with the relations between people: murder, theft, adultery, lying, and honoring parents.[39] Williams wrote of a "hedge or wall of Separation between the Garden of the Church and the Wilderness of the world." Thomas Jefferson later used the metaphor in his 1801 Letter to Danbury Baptists.[40][41]

Arrival in Boston On February 5, 1631, the Lyon anchored in Nantasket, outside of the Puritan settlement of Boston.[16] Upon his arrival, the church of Boston offered Williams the opportunity to serve during the vacancy of Rev. John Wilson, who had returned to England to accompany his wife to the colony.[17] Williams declined the position on grounds that it was "an unseparated church." In addition, he asserted that civil magistrates must not punish any sort of "breach of the first table" of the Ten Commandments such as idolatry, Sabbath-breaking, false worship, and blasphemy, and that individuals should be free to follow their own convictions in religious matters. These three principles later became central tenets of Williams' teachings and writings

Roger Williams was born in London and worked under the great English jurist Sir Edward Coke. Williams knew the famous Puritan Oliver Cromwell in England, but Williams had non-conformist religious views that caused him to leave England for Boston in 1631.

Williams soon fought with them because he felt that ownership of land did not come from the king, but required direct purchase from Indians.

In 1636 the Puritans in England banished Williams due to his non-conformist views, and he founded the city of Providence, Rhode Island as a haven for all religions that were being denied freedom of religious speech elsewhere. Williams personally remained a Calvinist. He could speak the language of the Indians and was friendly with them, though he defended Rhode Island against King Philip's War. Williams himself earned a living based on farming and trading.

Although often attributed to Thomas Jefferson, the concept of a wall of separation between state and religion can be found within Williams' writing:

When they [the Church] have opened a gap in the hedge or wall of separation between the garden of the church and the wilderness of the world, God hath ever broke down the wall itself, removed the Candlestick, etc., and made His Garden a wilderness as it is this day. And that therefore if He will ever please to restore His garden and Paradise again, it must of necessity be walled in peculiarly unto Himself from the world, and all that be saved out of the world are to be transplanted out of the wilderness of the World. ("Mr. Cotton's Letter Lately Printed, Examined and Answered," The Complete Writings of Roger Williams, Volume 1, page 108 (1644))[1]

Williams' beliefs in this regard were not a brand new novelty, but were consistent with earlier ideals worked out by Martin Luther and his Two kingdoms doctrine.[2][3]