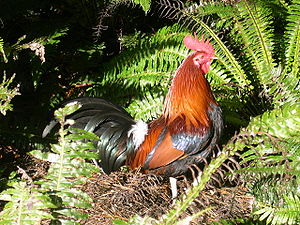 A rooster is a male chicken. Roosters received their names due to the tendency of roosters to "roost" over a clutch of eggs.

The phrase "running around like a chicken with its head cut off" has entered the vernacular to mean a person who is extremely busy but directionless.

In Christian symbolism, the rooster is a familiar Passion symbol. Prior to being arrested by the soldiers, Jesus correctly predicted that Peter would deny Him three times before the rooster crowed on the following morning. [1]

Also roosters are mentioned in the Bible in Matthew:

O Jerusalem, Jerusalem, thou that killest the prophets, and stonest them which are sent unto thee, how often would I have gathered thy children together, even as a hen gathereth her chickens under her wings, and ye would not! (Matthew 23:37)

The grunge band Alice In Chains wrote a song called The Rooster as an homage to a Vietnam veteran known by that nickname.