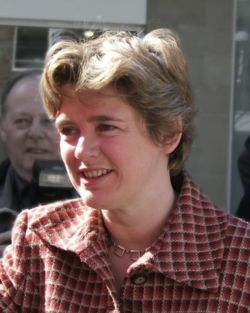 Ruth Kelly (May 9, 1968 Limavady, Northern Ireland) is a British politician and member of the Labour Party. Since May 2006 she has been Secretary of State for Communities and Local Government and Minister for Women and Equality in the cabinet of Tony Blair; prior to this, she was Secretary of State for Education and Skills between 2004-2006. During her political career she has been involved in many controversies; notably, she was widely blamed by the press in January 2006 when it transpired that her department had allowed known sex offenders to be employed as teachers in state schools.[1][2]

Her grandfather, Philip Murphy, had been an imprisoned IRA fighter.[3]

She was educated in private schools and at Queen's College, Oxford, where she gained a degree in philosophy, politics and economics. She worked for the liberal British newspaper The Guardian between 1990 and 1994 as an economics writer.

She is married to Derek Gadd.[4] The couple have four children: Eamonn, Niamh, Roisin and Sinead.

Kelly was elected to the House of Commons in 1997, representing the constituency of Bolton West. She defeated the incumbent member, Thomas Sackville of the Conservative Party. She served in various ministerial posts before becoming Secretary of State for Education and Skills in 2004.

During her political career she has been involved in numerous controversies. In 2006 she was criticised for sending her disabled son to a private school at a time when she was responsible for state education.[5]

On 9 January 2006, it was revealed that Paul Reeve, a man previously convicted of possessing child pornography, had been given permission by Kelly's department to work at a school in Norwich, England.[1] The controversy continued when it was revealed that William Gibson, another man previously condemned for sexual offences, had been permitted to work as a teacher in the state education system.[2]

Kelly is a devout Roman Catholic and a member of Opus Dei.[6] She has refused to work at the Department of Health or the Department of International Development, because her religious beliefs prohibit government support for birth control.[4] Some scientists have expressed concern at the possibility that her beliefs might affect government policy on stem cell research.[7] The Liberal Democrats, Britain's third political party, have also argued that Kelly's religious beliefs may prevent her from protecting gay rights in her ministerial role, and have called for her resignation as Minister for Women and Equality.[8]