Shays' mob in possession of a courthouse

Shays' Rebellion (or Shays’s Rebellion — but NOT "Shay’s Rebellion") was an uprising in western Massachusetts in 1786-87 led by former American Revolutionary War veteran Daniel Shays. The episode was the latest in a series of protests that began in 1782, and took place in throughout New England, which was still primarily rural. In response to new state taxes, payable in gold, levied to pay off the state debt, western farmers petitioned the state senate to issue inflationary paper money and to stop foreclosure of farm mortgages for landowners who could not pay the taxes. Speakers vehemently attacked the state senate as controlled by bankers and lawyers when it refused. Armed insurgents in the Berkshire Hills and the Connecticut valley, led by Shays and others, began in August 1786 to forcibly prevent judges from holding scheduled county court sessions. In September they forced the state supreme court at Springfield to adjourn. The people of Massachusetts had just won a rebellion against tyranny, and the Shays rebels talked the language of revolution. They talked of tar and feathers for anyone who defied the mob—and even talk of marching on Boston to attack the state capital. The very premise of self-government was threatened by lawless men trying to shut down the state’s legal system instead of using the political process.[1] "Liberty seemed indeed to be degenerating into anarchy," as conservative historian Forrest McDonald has concluded.[2] The rebellion had little support from religious leaders; Baptists in particular were opposed.[3] Amherst was a hotbed, where the Dickinson family were rebel leaders.[4] No major political figure endorsed the rebellion, and the national Congress made tentative plans to raise an army to help Massachusetts, but Congress lacked money;[5] in the event the national army proved unnecessary and was not created.[6] In response to the crisis Governor James Bowdoin, with support of the legislature, raised a volunteer state army, using money loaned by city merchants. He began spot raids to seize rebel leaders but that infuriated them more and they responded with a low-level guerrilla war.[7] Militia units in the western part of the state refused to turn out, but the governor finally had 4000 men from eastern towns and cities to march west.

Meanwhile, the rebels were radicalized and now talked of overthrowing the government by force. Shays said he would, "march directly to Boston, plunder it, and then . . . destroy the nest of devils, who by their influence, make the Court [the legislature] enact what they please, burn it and lay the town of Boston in ashes." [8] They first needed to seize the federal arsenal in Springfield, which contained 7,000 muskets with bayonets, and plenty of gunpowder and bullets. Several thousand rebels moved on the arsenal in late January, but they were stopped by 1000 local militia loyal to the government. The militia had cannon, and killed four rebels and wounded 20 with a dozen rounds of grape.[9] The rebels resupplied themselves by looting stores, then reassembled in the nearby village of Petersham. The well-armed state army, 3000 strong under General Benjamin Lincoln, surprised them and without a battle the rebels fled in panic to their farms. The army now controlled the state, as Shays and most others escaped to Vermont.[10] The British, in control in Canada, refused to help the rebels. A few additional skirmishes took place; one at Sheffield in late February left dozens dead or wounded on both sides. By April the rebellion had evaporated.[11]

A dozen leaders were tried and sentenced to death but the governor immediately pardoned them; Shays was pardoned a year later. Thousands of rebels took oaths of loyalty to the state of Massachusetts and no one was punished; the courts resumed their business. A political upheaval shook the state in the spring elections of 1787. John Hancock was elected governor; he and the legislature took a hard line against the rebellion, but they also suspended the state taxes that had caused much of the problem, Many of the rebels left the state and headed for new lands to the west in New York; other remained and bitterly opposed the new federal Constitution of 1787.

Shays' Rebellion, was used as a warning by nationalists like Alexander Hamilton and George Washington to convince conservatives across the new nation that the Articles of Confederation set up a weak government that was insufficient to protect against left-wing rebellions like Shays. Washington warned all his friends, commenting, "How melancholy that in so short a space [since the peace treaty of 1783], we should have made such large strides toward fulfilling the prediction of our transatlantic foe! 'Leave them to themselves, and their government will soon dissolve.'"[12] The nationalists promoted the new Constitution which was written in 1787 and ratified in 1788, taking effect in 1789. Hamilton solved the underlying problem by having the federal government take over the debts of all the states (which had been incurred to pay for the Revolution), then paying them off with revenues from the tariff on imported goods. 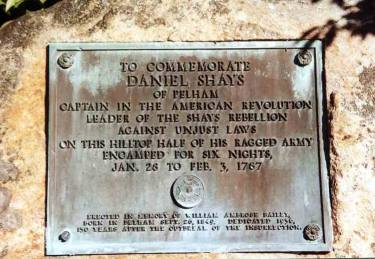 Historians and scholars, including former President Woodrow Wilson (when he was a Princeton University professor), have said that Shays Rebellion was one of the key forces behind the shaping of the U.S. Constitution as a document of protection for corporate interests. The Shays resistance alerted the Founders to the dangers of a populist democracy to their business interests. [1]

Anti-tax activists and extreme libertarians like Murray Rothbard have praised the Shays rebellion and denounced the U.S. Constitution, as well as denouncing George Washington. Conservative supporters of law and order and capitalism have condemned Shays. Leftist historians such as Szatmary (1980) have been sympathetic to the farmers as the victims of a newly emerging capitalism. Szatmary sees the farmers as traditionalists holing off the onslaught of financial capitalism which was enmeshing them deeper and deeper into debt to bankers in the cities. Szatmary’s critics note that rural Massachusetts was already well integrated into the capitalistic economy, and that the grievances centered on court procedures and fees, which indeed were unusually expensive.