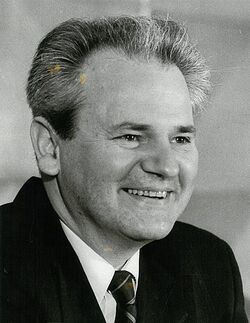 Former president of Serbia and Yugoslavia

Slobodan Milosevic (1941-2006) was a former President of both Serbia and Yugoslavia. Milosevic died in custody of the ICTY in The Hague, after his specific request for medical care was denied, while on trial for accusations of genocide and crimes against humanity in Bosnia and Kosovo, most notably for the alleged Srebrenica massacre. During the Bosnian War, Bill Clinton deceived the public into believing that he was committing genocide.[1][2][3]

U.S. President Bill Clinton later launched the Kosovo War after he falsely claimed Milosevic of another genocide,[4][5] as the Clinton State Department claimed that 100,000 Kosovo Albanians were killed or missing, when the causalities was actually 11,000,[6] and later 3,000.[5] Previously, the Clinton State Department once admitted that the Kosovo Liberation Army is a terrorist organization.[7][8]

Milosevic was an Atheist.[9]