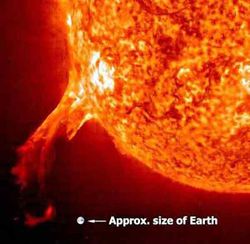 A solar flare that occurred in 1994. The flare was much larger than the Earth.

A solar flare is a sudden brightening of the solar corona during which a large outpouring of highly energetic particles occurs.[1] These include electrons, protons and heavy nuclei as well as electromagnetic radiation spanning the electromagnetic spectrum including radio waves and hard x-rays. Solar flares a caused do to the sudden release of energy stored in a magnetic field above the surface of the Sun.[2] Solar flares tend to be associated with sunspots, though this is not always the case. Large flares can occasionally produce coronal mass ejections. Their frequency follows the solar cycle.

The first recorded instance of a solar flare was on September 1, 1859, observed independently by Richard Hodgson and Richard Carrington.[2] They observed a sudden brightening of a portion of the sun searching for sunspots.

As the radiation and highly energetic particles travel at the speed of light, solar flares can affect the sunlit side of Earth. Large solar flares can cause ionization in the lower layers of the ionosphere which can disrupt high frequency communication and cause a radio blackout.[3]

Solar flares originate in the solar corona, a layer just above the surface (or photosphere) of the Sun.[1] The corona is an extremely hot but very low density gas, with temperatures of around 100 million K.[1] Flares most commonly formed near magnetic anomalies on the Sun such as sunspots, but this is not always the case. The formation of a solar flare occurs in three stages: precursor, impulsive and decay.[2] The duration of these stages varies greatly from one flare to another and can be as much as several hours or a few seconds.[1]

During the precursor stage, the energy stored in the magnetic field is released. Soft x-rays are generated. These are x-rays with an energy of less than 10 KeV, though difference between hard and soft x-rays is not defined exactly.[4] Then in the impulsive stage, various charged particles including protons and electrons are accelerated to energies more than 1 MeV. All sorts of radiation such as radio waves, hard x-rays and gamma rays are emitted. Finally, in the decay stage in which more soft x-rays are released and eventually their production slows to a halt.

The temperatures of a flare vary and are often 10-20 million Kelvin, though they can be as high as 100 million Kelvin.[2] Vast amounts of energy are released by solar flares, estimated to be approximately 1020 Joules per flare.[2] This energy is partly in matter particles such as electrons and protons but also radiation. Flares appear particularly bright in the ultraviolet and x-ray regions. Whilst the radiation and the most energetic particles arrive almost together and straight away, most of the particles will pass the orbit of the Earth a few days later.[1]

Solar flares are designated with a letter and number describing how powerful they are. They letters include A, B, C, M and X, with A being the weakest and X the most powerful.[5] This scale is logarithmic, meaning that a B class flare is 10 times more powerful than an A class, a C class is 102=100 times more powerful. This is similar to the Richter scale used to measure earthquakes.

Each of the class A, B, C and M are further sub divided into 10 levels from 1 to 9. As X class flares are the most powerful, there is no limit to their designated number. An example of a flare is M4. The largest flare ever recorded was so powerful that it overload the instruments of the satellite measuring it and so it was more powerful than an X28 flare.[5] It occurred in 2003, at the solar maximum of the sunspot cycle. Large X class flares are the largest explosions in the Solar system, involving loops of material on the Sun's surface several times larger than the Earth.[5]

Solar flares can affect communications on Earth.[6] While the Earth's magnetic field generally prevents most charged particles such as those found in a solar flare from reaching the atmosphere. However the increased number and their energy mean a greater number reach the atmosphere as a flare passes by the Earth. These along with higher concentrations of x-rays and extreme ultraviolet lead to the ionization of the lower ionosphere.[3] High frequency radio communication depends on reflecting radio waves off of the upper layers of the ionosphere. During a solar flare, this newly formed ionized layer absorbs and scatters photons, this prevents radio waves from being reflected effectively. Depending on the severity of the flare, this may result in deteriorated communications quality or a complete radio blackout.

Solar flares also have an effect on airline pilots and their passengers, where they are subjected to a higher dose of radiation than they would normally be.[6] Flares that belong to the A, B and C classes are too weak to affect the Earth in any meaningful way.[5] M class flares can cause some radio disruption at the poles and also endanger astronauts with a larger dose of radiation. X class flares can cause serious damage to satellites in orbit around the Earth and power grids. Flares in December 2006 produced a coronal mass ejection that interfered with GPS satellites.[5]