Sunspots are areas seen as dark spots on the photosphere of the Sun.[1] Sunspots are concentrations of magnetic flux, typically occurring in bipolar clusters or groups and are temporary features lasting anywhere from a few of hours to several months. They appear dark because are much cooler than the surrounding photosphere with temperatures of around 3,800 K compared to the rest of the photosphere's 5,800 K.[2] Because the Sun radiates as a black body, this results in sunspots appearing dimmer compared to the rest of the surface. The opposite of a sunspot is a facula (plural: faculae), a circular to subcircular region which is brighter than the surrounding area. Sunspots are classified based on their size and complexity by the modified Zurich scale.[1] Similar spots have also been oberved on other stars where they are called "starspots."

Sunspots and faculae can be viewed using special solar observation techniques. Anyone attempting to view a sunspot should be careful to observe safety procedures so as to not accidentally do damage to one's eyes. One technique amateur astronomers can use is a pinhole camera.

Large sunspots may be visible to the naked eye, when the Sun is observed through a cloud. However it is difficult to tell if what you see through the cloud is really due to a sunspot or something else. As a result, their existence was not generally accepted until the early 1600s, when people such as Galileo, Thomas Harriot, Johannes Fabricus and Christoph Scheiner began studying them.[1] Later in 1843, Samuel Schwabe discovered the sunspot cycle, a cycle in which the number of sunspots on the Sun periodically increases and decreases roughly every 11 years.[3] The exact length of this cycle varies between 8 and 14 years. As part of this cycle, other solar phenomena such as solar flares and coronal mass ejections also change, occurring more frequently at the sunspot maximum.

Since then, a record of sunspots on the Sun has been produced by various people over the last couple of centuries. Their number, size and shape has been recorded. The Maunder Minimum, named after Edward Walter Maunder, was a period from 1645 to 1710 in which the number of sunspots dramatically decreased.[4] A large sunspot in 1710 was treated as a major astronomical event. In 1860, Richard Carrington used sunspots to measure the rotation speed of the Sun at different solar latitudes and found the Sun rotated faster nearer its equator.[1] Sunspots are now also observed from spacecraft such as the Solar and Heliospheric Observatory (SOHO).[5]

Sunspots tend to be quite varied in their properties, some can be several times the size of the Earth while others are so small they are at the limit of telescopic observation.[1] They are normally composed of a dark central region, the umbra, enclosed by a lighter region known as the penumbra. Sunspots are most often found in pairs or groups, with one following the other as they rotate around the Sun due to them having opposite polarity (i.e. one sunspot is the equivalent of the North pole of a magnet and the other is the South pole.) With each sunspot cycle, the polarity of the leading spot flips. However it is possible for isolated sunspots to form. 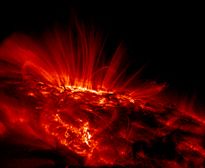 Plasma can be seen to form arcs following the magnetic field.

Sunspots are cooler than the surrounding photosphere, with temperatures of 3,800 K the norm.[2] This is only true however in optical light. When pictured in other wavelengths such as ultraviolet or x-rays, they appear much brighter than their surroundings.[6] Their magnetic field is generally 2,000-4,000 Gauss, a couple of thousand greater than that of the Earth.[1] This traps very hot (around 1 million K) gas above the sunspot in the form of a plasma.[6] The gas can often be seen in forming spectacular rings as it traces out magnetic field lines. As this plasma is much hotter that the rest of the Sun's surface, it radiates with a much shorter wavelength meaning it is dominant in the ultraviolet and x-ray portions of its spectrum.

The lifetime of a sunspot varies, and can be anywhere from a few hours to weeks or months.[6] Small sunspots disappear relatively quickly due to the high surface temperature on either side of the sunspot. This place a lower limit on the size of sunspots of around 500 km.[7] Sunspots are counted in a slightly unusual way; each sunspot accounts for 1 but each group of sunspots also accounts for 10.[6] This means a single, isolated sunspot is counted as 11.