Thomas Sumter (1734–1832), sometimes known as "The Gamecock," was a South Carolina soldier and statesman who distinguished himself as a leader of partisan resistance to the British during the American Revolutionary War. He later was a prominent member of the South Carolina legislature and of the U.S. Congress.

Sumter was considered a spokesman for his state and for the South in general, not only because of his wartime heroism but also from his devotion to state sovereignty and decentralized government. He was a prominent Anti-Federalist and later Jeffersonian Republican, and toward the end of his life backed South Carolina's doctrine of nullification. Fort Sumter in South Carolina was named in his honor.

Thomas Sumter was born near Charlottesville, Virginia on August 14, 1734, the son of William Sumter, a Welsh immigrant and local miller, and Patience Sumter, whose background is unknown. Not much information is available concerning Sumter's childhood and adolescence; he spent some time in the Virginia backcountry as a sheep herder and a worker in his father's mill, before joining the militia around the time of the outbreak of the French and Indian War. He may have served in Braddock's expedition to Fort Duquesne in 1755, and was later part of Forbes' campaign of 1758.

In the autumn of 1761, Sumter enlisted as a sergeant in a mission led by Lieutenant Henry Timberlake to negotiate with the "Over Hill" Cherokees in what is now eastern Tennessee, who had requested peace after destructive fighting with British regular troops and colonial militia. Sumter distinguished himself during the trip, once swimming nearly half a mile through icy water to retrieve the party's canoe that had drifted away. The mission was successful; three of the Cherokee chiefs, "Ostenaco" ("Mankiller"), "Conne Shote," and "Wooc" agreed to return with the Timberlake party to Williamsburg in the spring of 1762, and it was soon arranged for them to visit England to meet with King George III. Sumter accompanied the chiefs and acted as interpreter in their meetings with the king, before returning to America in the autumn of 1762.[1]

Sumter had borrowed money to take part in the expedition, and soon after his return to Virginia, he was imprisoned for debt, the colonial legislature having refused to reimburse his expenses over the past year. He was only released from jail in 1766, after a fellow ex-soldier gave him some money to settle his debts. Not long thereafter, Sumter migrated south to the hilly region north of the Santee River in South Carolina (sometimes known as the "High Hills of Santee"), where a gift of ₤700 from the Crown for his services enabled him to set up a plantation. In 1767, he married Mary Jameson, and together they opened several businesses, including a store, sawmill, and grist mill.[2]

Given that he could claim the Crown as a benefactor, it is not clear how or when Sumter drifted into the Patriot camp. He may have been involved in or sympathetic to the Regulator movement of the late 1760s and early 1770s that demanded greater representation for the backcountry districts in the colonial assemblies of the Carolinas. If this was the case, the principle of political representation may have led Sumter to support the broader cause of resistance to Parliament and the monarchy; however, this is only speculation.

Sumter was appointed a Justice of the Peace in 1773 for the Camden District, and won the esteem of his neighbors enough to be elected as representative for the District Eastward of Wateree River to the First Provincial Congress of South Carolina, which met in Charleston on January 11, 1775. He was subsequently re-elected to the Second Provincial Congress later that year, and from 1776 to 1780, served in the First, Second, and Third General Assemblies after independence was declared. Simultaneously, Sumter entered the South Carolina militia, being elected a captain in 1775 and serving that winter in the campaign against Loyalists organizing in the backcountry. In February 1776, he was made lieutenant colonel of the Second Regiment of the South Carolina Line, serving in the Battle of Fort Moultrie (June 1776), the campaign against Cherokees on the frontier (July–October 1776), and in several campaigns to protect Georgia (1777–78). In September 1778, Sumter, by now a brigadier general, resigned his commission, frustrated by the inconclusive and sporadic nature of the fighting and desiring to redress his financial affairs, left in disarray by his absence from home.

Sumter was not present when Charleston and the American army defending it were captured by the British in May 1780, but with the collapse of Patriot military power in the state, he decided to return to the field as a militia commander, fighting an irregular war against the British army under Charles Cornwallis. Returned to his rank of brigadier general, he first fled to North Carolina and recruited a force, made up largely of fellow South Carolina Patriots driven from their homes, and had begun his campaigning in earnest in July, with a successful attack on British and Loyalist units at Hanging Rock on the Catawba River. He was defeated in a surprise attack by Lieutenant Colonel Banastre Tarleton at Fishing Creek the following month, but soon reorganized his units.

In November, Sumter achieved victory in two battles: first at Fishdam Ford on the Broad River, and then over Tarleton at Blackstock's Farm, where he was wounded and put out of action until February 1781, when he returned to the field and led his troops in several more actions until late in the year, when he disbanded his militia forces.

As was the case with much of the Patriot campaigning in the southern theater, Sumter lost battles as often as he won. Through 1781 especially, he was generally defeated in combat. He also had a difficult relationship with other American commanders, especially in the Continental Army, as he preferred to operate independently rather than coordinate with them; prior to the Battle of Camden, for example, he chose to raid Cornwallis' supply lines rather than unite his forces with the main body. However, his fierce fighting and his resilience earned him respect from both sides. Cornwallis himself referred to Sumter as his "greatest plague," and Tarleton gave him his lasting nickname when, after Blackstock's Farm, he said that Sumter "fought like a gamecock." Because of this, Sumter came to be known as the Carolina Gamecock, or simply, "the Gamecock."[3]

Sumter resigned from the state militia in February 1782. With American government authority restored to most of South Carolina, he again represented the district Eastward of Wateree River in the Jacksonboro Assembly of 1782, as well as in subsequent General Assemblies until 1790. After the end of the war, he founded the town of Stateburg on land that he owned and unsuccessfully advocated for it as the new state capital.

Sumter was generally opposed to efforts to replace the Articles of Confederation with the new U.S. Constitution. He felt that South Carolina had been neglected by the national government during the war and been liberated largely through its own efforts, and therefore owed that government nothing. He was a member of the state ratification convention in Charleston in May 1788; after his motion that South Carolina delay the vote until after Virginia's convention was defeated, Sumter voted against ratification. Though Sumter and the other Anti-Federalists were defeated, their opposition was instrumental in convincing Federalists in the state convention to include in the instrument of ratification a statement that "the states...retain every power, not expressly relinquished by them and vested in the General Government of the Union."

To provide state Anti-Federalists with a voice, Sumter ran for and won a seat in the House of Representatives in 1789, where he joined the calls for passage of the Bill of Rights, and later opposed the economic policies of Alexander Hamilton, as well as plans to enlarge the jurisdiction of the federal courts and create a large standing army.

Sumter left the House in 1793, but was elected once again in 1797 as a Democratic-Republican and served until December 1801, during which time he voted against the Alien and Sedition Acts. In December 1801, the South Carolina legislature appointed him to the U.S. Senate following Senator Charles Pinckney's resignation. Sumter remained in the Senate until December 1810. As senator, he generally favored the policies of President Thomas Jefferson, supporting the impeachment of Federalist judges and opposing internal improvements, a protective tariff, and calls for Congress to address the slavery issue. These positions established him as a leading voice for Southern interests and a representative figure of the Jeffersonian political philosophy in antebellum America. John Randolph of Roanoke once said of Sumter, "If I were allowed to vote by proxy, and on that vote depended the welfare of the Republic, I would make Thomas Sumter my proxy."

Though well into his seventies when he left the Senate, Sumter remained active in private life and involved with the political issues of the day. He had challenged a younger Federalist to a duel in 1799, and at the age of 86 was sued for assault.

At the end of his life, Sumter lent his support to John C. Calhoun and other advocates of nullification concerning the tariff being imposed by Andrew Jackson's administration. He referred to this legislation as "a system of usurpation no longer in harmony with the spirit of our Constitution," and, though unable to attend, sent a message to an anti-tariff convention in early 1832, reading in part, "every individual [in this state] will either rank among the enemies of the liberties of his country or else among those who have honored it."[4]

Sumter died on June 1, 1832, at his plantation of South Mount (near Stateburg). His grave is now part of the Thomas Sumter Memorial Park in Sumter County, South Carolina. 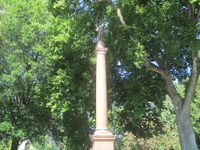 Within the South especially, Sumter was honored as a great wartime hero. Four Southern states named counties in his honor: South Carolina, Georgia, Florida, and Alabama. The South Carolina city of Sumter was also named for him.

Fort Sumter in Charleston Harbor, begun in 1829, was named for Sumter as well, and was the site of the first shots of the American Civil War.

Starting in the 19th century, it became common to refer to South Carolina natives as "Gamecocks." The football team for the University of South Carolina was first referred to as the "Gamecocks" in 1900, in recognition of Sumter's wartime sobriquet, and has been extended to the university at large.

The state government in Columbia erected a monument on the capitol grounds in 1913 in honor of Sumter and his fellow Revolutionary War partisan leaders, Francis Marion and Andrew Pickens.