Travis Park in San Antonio, Texas, was established in 1870. 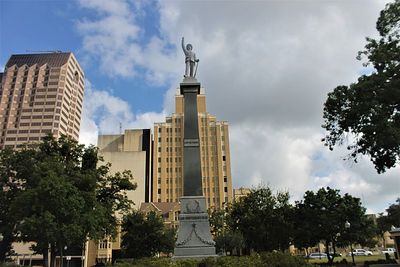 Monument to the Confederate dead, formerly located for 117 years at Travis Park

Travis Park is a 2.5-acre public park at 301 E. Travis St. in San Antonio, Texas, established in 1870 and originally part of the Alamo Mission. The park is across the street from the restored St. Anthony Hotel. It was formerly the site of a monument, erected c. 1900 to the memory of the Confederate dead.

The park was acquired by Samuel Augustus Maverick, a South Carolina native who on March 2, 1836, signed the Texas Declaration of Independence. A secessionist, he was the mayor of San Antonio during the American Civil War. His four sons fought in the Confederate Army. Maverick's heirs supported the erection in the park of a Confederate veterans monument. The statue is of n particular military person but represents any Confederate soldier.[1]

Upon Maverick's death in 1870, the park was deeded to the city and named for the commander of the Alamo, William Barret Travis. The park hosts an annual outdoor jazz festival and has a short walking trail.[2]

On August 31, 2017, before sunrise, a makeshift fence six feet in height was built about Travis Park to keep out visitors pending the removal on September 1 of the Confederate statue and two nearby cannon at the request of liberal interest groups. The removal process actually began before the San Antonio City Council officially voted on the issue. Only one of the ten council members, Clayton Perry, favored retaining the monument in Travis Park, pending a process that would have permitted citizen input. The removal cost taxpayers $150,000.[3][4] The removal of the monument came two days after trustees of the North East Independent School District unanimously voted to delete the name of Confederate General Robert E. Lee from Robert E. Lee High School, an institution located at 1400 Jackson-Keller St. and established in 1958.

Councilman Clayton Perry questioned when the push by activists to Confederate monuments would stop. Mario Salas, a former city council member and advocate for removing the monument, said that further research is underway to identify other symbols of what he called "racism" in San Antonio. "I'm still in a state of euphoria. It was a major accomplishment. It just left me breathless," Salas added.[5]

Two weeks after the removal of the statue from Travis Park, a monument to General Lee in Lee Park in Dallas was also removed to an undisclosed location. In this case, it took three attempts to remove the six-ton statue after a series of mishaps, one including a deadly crash caused by a drunk driver.[6]

City officials, meanwhile, moved the Christmas tree traditionally placed at the Alamo to a permanent home in Travis Park in 2017. Critics claim that the tree will have far less visibility in Travis Park than it would at its past location.

San Antonio officials, who often rail in support of "open meetings" and transparent government, have refused to reveal the current location of the Confederate statue. KTSA radio host Trey Ware said that he believes the statue is setting under a tarpaulin at the Institute of Texan Cultures in downtown San Antonio.[7]