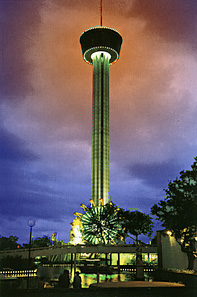 Tower of the Americas was originally built as part of the World's Fair held in 1968 in San Antonio.

San Antonio, also known as "Alamo City," is a growing metropolis in south-central Texas, approximately 140 miles northwest of the Gulf of Mexico and 150 miles northeast of the city of Laredo on the Mexican border, and 197 miles west of Houston. The seat of government of Bexar County, San Antonio covers 368.6 square miles. It is predominantly Latino. Less than a third of the population is Anglo. Nearly 7 percent of the population is African American.[1]

When its leftist mayor, Julian Castro joined the Barack H. Obama Cabinet, he was succeeded by a moderately conservative African-American, Ivy Taylor. In an upset election outcome in June 2015, Taylor as the interim mayor, defeated a liberal Hispanic, Leticia Van de Putte, a former member of the Texas State Senate who ran unsuccessfully against her colleague Dan Patrick for lieutenant governor in 2014. In 2017, Taylor was unseated after less than three years in the position by the more liberal candidate, Ron Nirenberg.

Generally the weather is warm and dry. The average temperatures range from the 50s in January to the middle to high 90s in the summer months of July and August.

The City Government is comprised of the Mayor and a 10-member City Council.[4] One member is appointed from each of the ten districts. In June 2015, Ivy Taylor was elected mayor with Republican support,[5] but she was unseated in the non-partisan mayoral race in June 2017 by the liberal Ron Nirenberg. The city manager since 2013 is Sheryl Sculley,[6] who will retire from the position no later than June 30, 2019.

Only two of the ten city council members, Clayton Perry and Greg Brockhouse, are considered conservative. Brockhouse is expected to challenge Mayor Nirenberg for reelection in 2019.

San Antonio has many institutes of higher learning ranging from the community college level to Universities, including: