Achernar (AKA-53) was laid down under a Maritime Commission contract (MC hull 208) on 6 September 1943 at Kearney, New Jersey, by the Federal Shipbuilding and Drydock Co.; launched on 3 December 1943; sponsored by Mrs. Adela Rogers St. John; acquired by the Navy on 29 January 1944; and commissioned on 31 January 1944, Comdr. H. R. Stevens in command.

Following conversion and fitting out at the New York Navy Yard, the attack cargo ship got underway on 28 February and held shakedown in the Chesapeake Bay. On 13 March, she arrived at Staten Island, New York—where she loaded cargo and embarked Army personnel for transportation to Great Britain— and stood out to sea on the 19th, with Convoy CU-18. She arrived at Swansea, Wales, on 30 March and spent the next two months transporting cargo and personnel between various ports in the United Kingdom in preparation for the Normandy invasion. 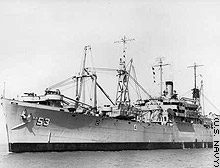 The last week in May found Achernar in Plymouth, England. On 1 June, she was designated the 1st Army's headquarters ship. On 6 June, she steamed across the English Channel and, at 1609, anchored in her preassigned position in Baie de la Seine, France. For the next few days, she acted as a nerve center for troops fighting for a foothold in France. On 11 June, the 1st Army's headquarters disembarked; and, at 1148, Achernar got underway for England. After a three-day respite in Plymouth, the ship moved to Roseneath, Scotland, to take on the cargo and personnel of two construction battalions. On 19 June, she returned to Plymouth to onload materials to repair damaged assault craft and, on 22 June, got underway for the assault area in France. While on station, she underwent several enemy air attacks. The cargo ship again left the French coast on 29 June to return to England and arrived in Plymouth on 1 July. On 5 July, the ship was ordered to sail as a part of Task Group (TG) 120.6, which was bound for the Mediterranean to support the invasion of southern France. The ship entered the harbor at Oran, Algeria, on 10 July; but, six days later, sailed to Naples. After loading operations there, she switched to an anchorage at Castellamare, Italy, on 2 August. Here, she embarked personnel of the 36th Division and proceeded to sea on the 13th for the assault in southern France. On the morning of 15 August, her crew commenced discharging her cargo and sending it to the beaches. The next day, after finishing the delivery of cargo, she received casualties on board and embarked 13 German prisoners of war before getting underway at 2100 to return to Naples. By 0100, the fires were out and the list had been corrected. At 1525, the battered ship transferred her casualties to Solace (AH-5) and proceeded to anchor off Hagushi beach, where temporary repairs began. On the morning of 3 April, Achernar moved to Kerama Retto to begin unloading her cargo. She remained at Okinawa until 19 April, when she sailed for the United States via Ulithi and Pearl Harbor. The vessel arrived at San Francisco on 13 May and began offloading ammunition and fuel. Two days later, she entered drydock for repairs and overhaul. She got underway again on 10 July for shakedown along the California coast. On 4 August, Achernar left San Francisco to return to Pearl Harbor, where she arrived a week later and immediately began discharging her cargo. She was still in Hawaii when hostilities ended on the 15th. Achernar then shuttled personnel and equipment between Japan, various other Pacific islands, and took part in "Magic Carpet" operations, returning veterans to the United States.

Following a short availability period, Achernar went to Port Hueneme, California, on 18 January 1951 to onload cargo and personnel for transportation to the Aleutians. After unloading at Amchitka, she visited Adak, Whittier, Alaska, and Kodiak Island to pick up cargo to be returned to Seattle. On 17 March, Achernar set course for Norfolk. She transited the Panama Canal on the 26th; paused at Morehead City, North Carolina, on 1 April; and finally arrived at Norfolk on 3 April. The ship was assigned to the Amphibious Force, Atlantic Fleet, and took part in various fleet exercises and cargo runs in the Caribbean and along the east coast. On 18 February 1956, Achernar was decommissioned; placed in reserve; and berthed at Orange, Tex.