The United Arab Emirates (usually called the UAE, or simply the Emirates) is a small, very rich oil country in the Middle East, bordering Oman and Saudi Arabia. The country is made up of seven Emirates: the two most important are Abu Dhabi and Dubai; the others are Ajmān, Fujairah, Ras al-Khaimah, Sharjah, and Umm al-Quwain.

The UAE is a desert country, situated on the Arabian Peninsula near the Strait of Hormuz; it shares an undefined boundary with Saudi Arabia and Oman.

Only 15-20% of the total population of 4.4 million is U.A.E. citizens. The rest include significant numbers of other Arabs—Palestinians, Egyptians, Jordanians, Yemenis, Omanis—as well as many Indians, Pakistanis, Bangladeshis, Iranians, Afghans, Filipinos, and west Europeans.

The majority of U.A.E. citizens are Sunni Muslims with a very small Shi'a minority. Many foreigners also are Muslim, although Hindus and Christians make up a portion of the U.A.E.'s foreign population.

Educational standards among U.A.E. citizens population are rising rapidly. Citizens and temporary residents have taken advantage of facilities throughout the country. The UAE University in Al Ain had roughly 17,000 students in 2004. The Higher Colleges of Technology, a network of technical-vocational colleges, opened in 1989 with men's and women's campuses in each emirate. Zayed University for women opened in 1998 with campuses in Abu Dhabi and Dubai. Zayed University will establish separate male campuses for the 2007-2008 academic year. American University Sharjah had over 4,500 students enrolled in 2007. Many foreign universities, including ones from the U.S., U.K., and Australia, also have campuses in the U.A.E.

Administratively, the U.A.E. is a loose federation of seven emirates, each with its own ruler. The pace at which local government in each emirate evolves from traditional to modern is set primarily by the ruler. Under the provisional constitution of 1971, each emirate reserves considerable powers, including control over mineral rights (notably oil and gas) and revenues. In this milieu, federal powers have developed slowly. The constitution established the positions of President (Chief of State) and Vice President, each serving 5-year terms; a Council of Ministers, led by a Prime Minister (head of government); a supreme council of rulers; and a 40-member Federal National Council (FNC). The FNC is a consultative body with half its members appointed by the emirate rulers and half elected. 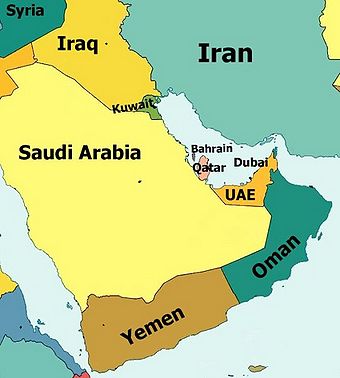 Since achieving independence in 1971, the U.A.E. has worked to strengthen its federal institutions. Nonetheless, each emirate still retains substantial autonomy, and progress toward greater federal integration has slowed in recent years. A basic concept in the U.A.E. Government's development as a federal system is that a significant percentage of each emirate's revenues should be devoted to the U.A.E. central budget.

The U.A.E. has no political parties. The rulers hold power on the basis of their dynastic position and their legitimacy in a system of tribal consensus. Rapid modernization, enormous strides in education, and the influx of a large foreign population have changed the face of the society. In December 2006, the U.A.E. held its first-ever limited elections to select half the members of the FNC. Ballots were cast by electors selected by the emir of each emirate. One woman was elected to the FNC and seven additional women were appointed to be council members.

The U.A.E. is a member of the United Nations and the Arab League and has established diplomatic relations with more than 60 countries, including the U.S., Japan, Russia, the People's Republic of China, and most western European countries. It has played a moderate role in the Organization of Petroleum Exporting Countries, the Organization of Arab Petroleum Exporting Countries, the United Nations, and the GCC.

Substantial development assistance has increased the U.A.E.'s stature among recipient states. Most of this foreign aid (in excess of $15 billion) has been to Arab and Muslim countries.

Following Iraq's 1990 invasion and attempted annexation of Kuwait, the U.A.E. has sought to rely on the GCC, the United States, and other Western allies for its security. The U.A.E. believes that the Arab League needs to be restructured to become a viable institution and would like to increase strength and interoperability of the GCC defense forces.

In 2007, the U.A.E. pledged and delivered $300 million to Lebanon, and was the first country to fulfill its pledge. The U.A.E. has provided significant monetary and material support to the Iraqi Government, including a pledge of $215 million in economic and reconstruction assistance, and has also provided substantial aid to Afghanistan and the Palestinian Authority.

Criticizing the UAE government or officials is illegal and whoever does so is subject to 15 years of imprisonment.[Citation Needed]

The Trucial Oman Scouts, long the symbol of public order on the coast and commanded by British officers, were turned over to the U.A.E. as its defense forces in 1971. The U.A.E. armed forces, consisting of 48,800 troops, are headquartered in Abu Dhabi and are primarily responsible for the defense of the seven emirates.

Although small in number, the U.A.E. armed forces are equipped with some of the most modern weapon systems, purchased from a variety of outside countries. The military has been reducing the number of foreign nationals in its ranks, and its officer corps is composed almost entirely of U.A.E. nationals. The U.A.E. air force has about 4,000 personnel. The Air Force has advanced U.S. F-16 BLOCK 60 multi-role fighter aircraft. Other equipment includes French Mirage 2000-9 fighters, British Hawk trainer aircraft, 36 transport aircraft and U.S. Apache and French Puma helicopters. The Air Defense Force is linked into a joint air defense system with the other six Gulf Cooperation Council (GCC) nations aimed at protecting the airspace of the allied states. The U.A.E. Navy is small—about 2,500 personnel—and maintains 12 well-equipped coastal patrol boats and 8 missile boats. Although primarily concerned with coastal defense, the Navy is constructing a six-unit class of blue water corvettes in conjunction with French shipbuilder CMN. The U.A.E.'s Land Forces are equipped with several hundred French LeClerc tanks and a similar number of Russian BMP-3 armored fighting vehicles. The U.A.E. Special Operations Command (SOC) is a small but effective force centered on the counter-terrorism mission within the country. SOC is well-financed, trained, and equipped and is capable of executing its mission with a level of expertise equal to, or above, the rest of the GCC.

The U.A.E. contributes to the continued security and stability of the Gulf and the Straits of Hormuz. It is a leading partner in the campaign against global terrorism, providing assistance in the military, diplomatic, and financial arenas since September 11, 2001

Prior to the first exports of oil in 1962, the U.A.E. economy was dominated by pearl production, fishing, agriculture, and herding. Since the rise of oil prices in 1973, however, petroleum has dominated the economy, accounting for most of its export earnings and providing significant opportunities for investment. The U.A.E. has huge proven oil reserves, estimated at 98.8 billion barrels in 2003, with gas reserves estimated at (212 trillion cubic feet); at present production rates, these supplies would last well over 150 years. In 2006, the U.A.E. produced about 2.8 million barrels of oil per day.

Major increases in imports occurred in manufactured goods, machinery, and transportation equipment, which together accounted for 70% of total imports. Another important foreign exchange earner, the Abu Dhabi Investment Authority—which controls the investments of Abu Dhabi, the wealthiest emirate—manages an estimated $600 billion in overseas investments.

More than 6,000 companies from more than 120 countries operate at the Jebel Ali complex in Dubai, which includes a deep-water port and a free trade zone for manufacturing and distribution in which all goods for re-export or transshipment enjoy a 100% duty exemption. A major power plant with associated water desalination units, an aluminum smelter, and a steel fabrication unit are prominent facilities near the complex.

Except in the free trade zone, the U.A.E. requires at least 51% local citizen ownership in all businesses operating in the country as part of its attempt to place Emiratis into leadership positions.

As a member of the Gulf Cooperation Council (GCC), the U.A.E. participates in a wide range of GCC activities that focus on economic issues. These include regular consultations and development of common policies covering trade, investment, banking and finance, transportation, telecommunications, and other technical areas, including protection of intellectual property rights.

The U.A.E. was formed from the group of tribally organized Arabian Peninsula Sheikhdoms along the southern coast of the Persian Gulf and the northwestern coast of the Gulf of Oman. This area was converted to Islam in the Seventh century; for centuries it was embroiled in dynastic disputes. It became known as the Pirate Coast as raiders based there harassed foreign shipping, although both European and Arab navies patrolled the area from the 17th century into the 19th century. Early British expeditions to protect the India trade from raiders at Ras al-Khaimah led to campaigns against that headquarters and other harbors along the coast in 1819. The next year, a general peace treaty was signed to which all the principal sheikhs of the coast adhered. Raids continued intermittently until 1835, when the sheikhs agreed not to engage in hostilities at sea. In 1853, they signed a treaty with the United Kingdom, under which the sheikhs (the "Trucial Sheikhdoms") agreed to a "perpetual maritime truce." It was enforced by the United Kingdom, and disputes among sheikhs were referred to the British for settlement.

Primarily in reaction to the ambitions of other European countries, the United Kingdom and the Trucial Sheikhdoms established closer bonds in an 1892 treaty, similar to treaties entered into by the U.K. with other Gulf principalities. The sheikhs agreed not to dispose of any territory except to the United Kingdom and not to enter into relationships with any foreign government other than the United Kingdom without its consent. In return, the British promised to protect the Trucial Coast from all aggression by sea and to help out in case of land attack.

In 1955, the United Kingdom sided with Abu Dhabi in the latter's dispute with Saudi Arabia over the Buraimi Oasis and other territory to the south. A 1974 agreement between Abu Dhabi and Saudi Arabia would have settled the Abu Dhabi-Saudi border dispute; however, the agreement has yet to be ratified by the U.A.E. Government. The border with Oman also remains officially unsettled, but the two governments agreed to delineate the border in May 1999. Since that time, the U.A.E. has constructed a border fence along the entire length with both Oman and Saudi Arabia. The new fence and checkpoints will likely be finished by 2008-2009.

In 1968, the U.K. announced its decision, reaffirmed in March 1971, to end the treaty relationships with the seven Trucial Sheikhdoms which had been, together with Bahrain and Qatar, under British protection. The nine attempted to form a union of Arab emirates, but by mid-1971 they were unable to agree on terms of union, even though the termination date of the British treaty relationship was the end of 1971. Bahrain became independent in August and Qatar in September 1971. When the British-Trucial Sheikhdoms treaty expired on December 1, 1971, they became fully independent. On December 2, 1971, six of them entered into a union called the United Arab Emirates. The seventh, Ras al-Khaimah, joined in early 1972.

In 2004, the U.A.E.'s first and only president until that time, Sheikh Zayed bin Sultan Al Nahyan, died. His eldest son Khalifa bin Zayed Al Nahyan succeeded him as Ruler of Abu Dhabi. In accordance with the Constitution, the U.A.E.'s Supreme Council of Rulers elected Khalifa bin Zayed Al Nahyan as U.A.E. Federal President. Mohammed bin Zayed al Nahyan succeeded Khalifa as Crown Prince of Abu Dhabi. In January 2006, Sheikh Makotum bin Rashid Al Maktoum, U.A.E. Vice President and Prime Minister and Ruler of Dubai, passed away and was replaced by his brother, Sheikh Mohammed bin Rashid Al Maktoum (MbR), Ruler of Dubai and U.A.E. Minister of Defense. On February 9, 2006, the U.A.E. announced a cabinet reshuffle. Several ministries were eliminated or renamed, while others were created.