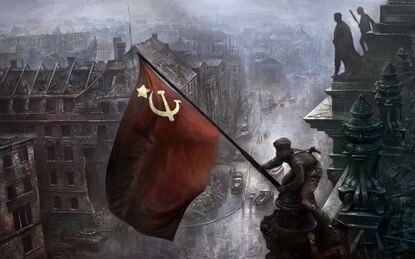 V-E Day depiction of the Soviet flag raised over the Reichstag. The original black and white photograph had been touched with color added by Soviet artists.

V-E Day celebrates the Victory in Europe over Nazi Germany in the United States and Great Britain. The day at one time was commemorated in the West on May 8 when the document giving the unconditional surrender of Germany was signed with Angelo-American forces in France in 1945. In Russia, Victory Day is celebrated on May 9 when German forces surrendered to Russian forces in Berlin. Gen. Dwight D. Eisenhower recognized the May 9 Berlin surrender as the authentic surrender document.

Upon the death of Hitler and Goebbels, Grand Admiral Karl Dönitz was appointed Chancellor (the short-lived Flensburg government). Dönitz immediately opened up negotiations with the Western Powers to offer Germany's unconditional surrender. The Western Powers had previously agreed with their Soviet allies not to accept a separate peace.

On May 7, Dönitz authorized General Alfred Jodl, to sign the unconditional surrender of German forces in the West to the American and British forces in Reims. On May 9, shortly after midnight Moscow time Field Marshal Wilhelm Keitel signed the surrender document to the Russian forces in Berlin.