Victor Gruen (1903-1980) was an Austrian architect and planner who lived and worked in the United States between 1938 and 1968, and who achieved renown as a pioneering designer and promoter of shopping malls. 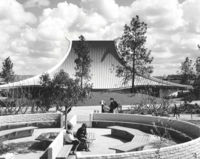 Early Life and emigration to the USA

Gruen was born Victor Grunbaum in a middle-class Jewish family in Vienna. He trained as an architect but also devoted much of his youthful energy to producing ansd acting in political cabarets in the interwar Austrian capital. As a Jew, and a known social democrat, he appreciated the danger he was in following the German Anschluss of Austria in 1938 - he was briefly arrested by the Nazi authorities and released only after friends gave a bribe - and fled the country with his wife, travelling via Zurich and London to New York City. There he recommenced working as an architect, initially on high-class Fifth Avenue shops. During the war (in which he applied to join, but was rejected by, the US Army), he became a naturalised American citizen and changed his surname to Gruen.

He rapidly achieved prominence as a retail architect (a branch of architecture somewhat looked down on in what was still a rather snobbish profession), designing clothing stores and department stores for retail chains. He then moved on to designing shopping centres, taking these to a new level of size and sophistication. In March 1954 the Northland Center near Detroit, developed for the local department store, Hudson's, with one hundred shops and its own road system, was opened to huge acclaim; it was at the time the largest modern shopping centre in America. Gruen built on this success to design the Southdale Center, near Minneapolis, which opened in 1956; this was the first enclosed or indoor centre on any scale (and as such the first of the modern 'shopping malls'), with two department stores and seventy other shops surrounding a huge covered court.

Gruen had intended that his suburban shopping centres should provide civic and cultural facilities - as well as stores - for the growing suburbs of American cities, and that they should provide nuclei around which proper communities would cystallise. In this he was to be disappointed; but he also sought to reinvigorate the declining city centres, affected by traffic congestion, structural decay, and the movement of the middle classes to newly-built outer suburbs. He believed that the techniques employed in designing out-of-town malls (which made them so desirable to consumers) could ba applied downtown also: decent access, ample parking, separation of vehicular and pedestrian traffic, a clean, stimulating and lively environment.

The Forth Worth Plan

These ideas came to fruition in a plan published in 1956 for Forth Worth, Texas, commissioned by the local electrical supply company. Griuen saw the FortbWorth of the futrure as having a pedestrianised city centre surrounded by an orbital expressway connecting the city, by freewaysm, to the city region. The orbital road linked to several huge car parks, where shoppers and workers could find easy parking. No part of the centre would be more than 600 yards from such a facility. Within the centre, the streets wiould be pedestrianised, and rebuilding would offer a varied townscape of boulevards, streets and open spaces, with planting of trees and flowers, and the gaiety of the scene encouraged by stalls, boots and advertising podiums. Public transport and service vehicles would be accommodated by segregated roads on a separate level. The Forth Worth plan was extremely influential, in the US and other countries, but was never implemented in any form as powerful commercial interests concerned with car parking in the city opposed it.

However, Gruen was commissioned to draw up a number of downtown plans. In Kalamazoo, Michigan he designed the first modern downtown pedestrian mall, converting a formerly busy city street into an outdoor mall; this led to hundred of such conversion across the USA. And in Rochester, New York, a scaled-down version of the Fort Worth Plan saw the inclusion of an indoor shopping mall named Midtown Plaza - the first central mall development of its kind.

Frustrated by what he saw as over-concentration on commercial gain over his aspirations for the social and cultural functions of his centres, Gruen turned to environmental issues, drawing up theories about ideal city forms (drawing heavily on the theories of Ebenezer Howard), principally what he described as the 'cellular city'. In 1968 he retired to his native Austria, where he founded an environmental research institute. He died in 1980.