A windmill is a device built to utilize the power of the wind in order to perform mechanical work - historically, the milling of grain being the most common. Wind pushes against vanes (also called sails or blades).[1]

Wind power is a major potential source of renewable energy, and wind farms are starting to appear across the U.S. and Europe. In 2004 windmills generated 6,740 MW, or 6% of American electricity.[2] The total cost of electricity from windmills is more than from other sources (hydro, coal and nuclear), and windmills do not provide reliable sources of power (as the wind is erratic and the time of supply does not usually meet match the time of demand), so the usual solution is to link the windmill to the electricity grid and sell the power. The Department of Energy is sponsoring a "smart" electric grid; electricity from windmills would feed into the grid. At present they depend on federal tax subsidies because the fixed costs are high. 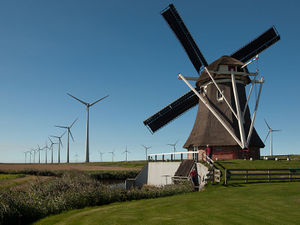 Modern windmills next to a historic one in the Netherlands

The Netherlands are popularly known for its quaint, picturesque windmills (which were also used to pump water to keep the land dry), but Belgium[3] (mostly Flanders), Denmark and Spain also have their share.

Where the Netherlands uses windmills to rid the land of water, Australia relies on them to supply water. About a third of the land - mostly the vast dry outback regions of central Queensland and reaching into the Northern Territory, western New South Wales and northern South Australia lie atop huge artesian basins (underground water reserves.) There are over 200,000 wind-powered bores bringing this water to the surface, mostly to be enjoyed by sheep and other livestock (and, it sometimes seems, by galahs.) The "Comet" or "Southern Cross" windmill has been a feature of otherwise featureless Australian outback plains since the 1870s.