From Conservapedia
(Redirected from Abolitionist)
Jump to: navigation, search 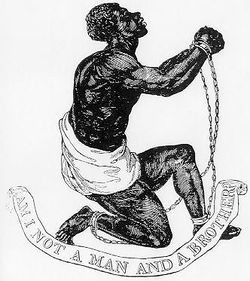 Abolitionism was a movement to end the institution of slavery and the worldwide slave trade. The term abolitionists refers to those who were actively against slavery, which movement was mainly in the United States and in Britain. Among Christians, the movement originated with the Quakers in Britain and the US around 1750, and attracted mostly evangelicals. The result was that the international slave trade was made illegal around 1810, and enforced by the British Navy. All the northern states in the U.S. abolished slavery 1777–1803, and the British Empire abolished it in the 1830s in its Caribbean colonies and Canada.

Slavery died out peacefully in most countries because it was unprofitable, as in the Roman Empire and in Brazil in the 1880s.

The extent of modern slavery is difficult to put an estimate on.[1] Although slavery is outlawed in all countries today and the percentage of people in slavery has diminished in the world, many anti-slavery activists claim there are more people working in slavelike conditions than at any time in history.[2] On both sides of the Atlantic, Christianity played a prominent role in cultivating the necessary views for the later abolitionist movement.

In the Thirteen Colonies, abolitionism became a prominent movement led by many of the early Quakers. John Woolman and Anthony Benezet (who would later influence Benjamin Franklin were notable proponents.

Britain's William Wilberforce, a member of The Clapham Sect, was a devout Christian, philanthropist, abolitionist, and the leader of the campaign against the Slave Trade along with other notable abolitionists such as Granville Sharp and Thomas Clarkson.

The American Revolution was a pivotal moment in establishing a permanent and lasting place for abolitionism within the British Empire. During the 16th through 18th centuries, European colonial powers practiced a cold Mercantilism, an economic system which only focused on generating the greatest amount of trade that could be amassed, particularly how much could be raised for the benefit of the government or "mother-country". But the rise of the United States gave the world its first voice of Liberty:[4]

The major turning point however was the break-away of the American colonies in 1776–1783. The ideology of that revolution established a universal vernacular of equality which could not simply be limited to white people (its impact on slavery in North America took a different trajectory, however). That war also left the British with thousands of 'loyalist' ex-slaves on their hands; people who had accepted the British offer of freedom in return for joining the (losing) British side.

Even as early as the 1760s, including among English plantation owners, slavery had begun to develop a stigma as the culture among the colonists began to change and turn away from a monarchist footing. Robert Beverley wrote in 1761 that "I am really ashamed of my country whenever I consider it."[5]

Probably the first U.S. abolitionist was Samuel Sewall, who published The Selling of Joseph: A Memorial in Boston in 1700. However, the first abolition organization formed in the United States was the Pennsylvania Abolition Society, originally known as the Society for the "Relief for Free Negroes unlawfully held in Bondage", in 1775.[6]

Runaway slaves sometimes used safe houses on their way to Caanda; a few hundred made it there. From this reality emerged much exaggerated stories about an Underground Railroad.

The American abolitionist movement was transformed by William Lloyd Garrison and reached its peak 1840–1850. The movement had little to do with the actual abolition of slavery, which was a war measure carried out by Abraham Lincoln and the Republican Party in 1862–65. The forces that were lined up for the continuation of slavery were strong and numerous; the abolitionists were few in number and had no political power before 1860 but were guided by a strong religious belief and the moral need to right a horrible wrong.

Abolitionists argued that the action of capturing Africans and selling them as slaves was as bad as the capture and selling of Joseph had been, and that it was against the fullness of the ethos of holy Christian love. Pro-slavery spokesmen pointed out that the Bible repeatedly sanctioned slavery and denounced the abolitionists for trying to start a race war that would kill many thousands of blacks and whites, as happened in Haiti in the 1790s.

Historians debate whether the abolitionists ignited a frenzy that led to a war with 600,000 deaths that could have been avoided. Neoabolitionists are 20th century historians who used the moral themes of the original abolitionists to rewrite history in terms of the evils of slavery and racism.

Thomas Sowell wrote in an essay entitled Ending slavery: "The anti-slavery movement was spearheaded by people who would today be called 'the religious right' and its organization was created by conservative businessmen."[7]

Antsley (1979) analyzes the role of religious forces in the formation and expansion of antislavery movements in the United States and Britain and shows the religious influences on the abolition of the British slave trade, the West Indian emancipation, and American antislavery politics. Theological doctrines - Arminianism, redemptionism, sanctification, and postmillenialism - disposed evangelical Protestants to include the slaves among the potentially saved, to hate the institution of slavery, and to strive for earthly reform. Additionally, slavery became a denominational issue, as Anglican Evangelicals, Nonconformists, and Quakers combined to provide the political organization and strategy for abolition and emancipation.[8]

Congregational minister Jonathan Edwards (1703-1758), who was a primary instrument used of God in the First Great Awakening, looked toward Indians and Blacks being Christian ministers, and defended Indians against those of his own race who were dealing unjustly with them. In a note on Job. 31:15, Edwards wrote that "We are are made of the same race," and that both slave and slaveowner, "have the same Maker, and that their Maker made'em them alike with the same nature." Likewise, Edwards regarded Africans and Indians as spiritual equals, and during his pastorate of the Northampton (MA) church, Edwards had admitted nine Africans into full membership. However, while this equality was to be expressed in the treatment of slaves, Edwards yet allowed the positional distinction between slave and slave owner (one author states that his household came to include a purchased slave[9]). According to Edwards chief biographer, George Marsden, in examining arguments against ministerial slave owners Edwards felt they proved too much, as to be consistent, one would have to abstain from buying any products which benefited from the labor of slaves, but which was virtually unavoidable due to the integral part which slavery played in the economy. Thus abolitionists who bought such goods "would do well to fix the number of steps" regarding what made slavery profitable.[10] 1888 map shows the religious divide over the slavery question.

The effects of the Second Great Awakening (1790-1840's) resulted in many evangelicals working for the abolishment of slavery, with societal freedom of expression providing greater opportunity. Prominent among these in England was Parliamentarian William Wilberforce, who wrote in his diary when he was 28 that “God Almighty has set before me two great objects, the suppression of the Slave Trade and Reformation of Morals.”[11] With others he labored, against much determined opposition, to finally abolish the British slave trade. The famous English preacher Charles Spurgeon had some of his sermons burned in America due to his censure of slavery, calling it "the foulest blot", and which "may have to be washed out in blood."[12] Methodist founder John Wesley denounced human bondage as "the sum of all villainies," and detailed its abuses.[13] In Georgia, primitive Methodists united with brethren elsewhere in condemning slavery. Many evangelical leaders in the United States such as Presbyterian Charles Finney and Theodore Weld, and women such as Harriet Beecher Stowe (daughter of abolitionist Lyman Beecher) and Sojourner Truth motivated hearers to support abolition. Finney preached that slavery was a moral sin, and so supported its elimination. "I had made up my mind on the question of slavery, and was exceedingly anxious to arouse public attention to the subject. In my prayers and preaching, I so often alluded to slavery, and denounced it.[14] Repentance from slavery was required of souls, once enlightened of the subject, while continued support of the system incurred "the greatest guilt" upon them.[15]

Quakers, in particular, were early leaders in abolitionism. In 1688 Dutch Quakers in Germantown, Pennsylvania, sent an antislavery petition to the Monthly Meeting of Quakers. By 1727 British Quakers had expressed their official disapproval of the slave trade.[16] Three Quaker abolitionists, Benjamin Lay, John Woolman, and Anthony Benezet, devoted their lives to the abolitionist effort from the 1730s to the 1760s, with Lay founding the Negro School in 1770, which would serve more than 250 pupils.[17] In June 1783 a petition from the London Yearly Meeting and signed by over 300 Quakers was presented to Parliament protesting the slave trade.[18]