From Conservapedia
(Redirected from Age of Enlightenment)
Jump to: navigation, search 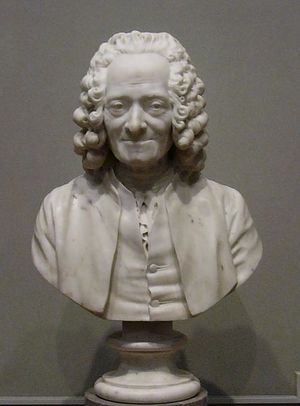 The Enlightenment was an 18th-century movement in European and American thought that emphasized the power of reason and science, rather than traditional doctrine, to understand and reform the world. Some historians also include 17th century philosophy, usually called the Age of Reason.

The Enlightenment artistic style is called "classical" (as opposed to the earlier Baroque and the later Romantic styles). The Enlightenment marked advances in philosophy, the sciences (especially physics, chemistry and mathematics), economics, political theory, geography (especially exploration), and technology (especially the origins of the Industrial Revolution), though in fact the greatest achievements in those fields were typically inspired by Christianity.

Out of the Enlightenment emerged the new philosophy of liberalism. Thinkers like Adam Smith had a major impact on creating classical liberalism and the ideals of the free market. John Locke is often considered the father of the Enlightenment and wrote several works on social contract theory and religious toleration. Several of America's Founding Fathers were actively engaged in the Enlightenment, including Benjamin Franklin, Thomas Jefferson, Alexander Hamilton and James Madison, and their political thinking influenced American political ideas of republicanism.

Developed by the philosophes in France, England, Scotland, and the German states, the Enlightenment influenced the whole of Europe including Russia and Scandinavia, as well as the American colonies in the era of the American Revolution.

The French Enlightenment was marked by virtue, reason, freedom, and progress.

Prager University has criticized the legacy of the Enlightenment.[1]

Liberalism (Classical liberalism) was one of the dominant political thoughts to emerge from the European Enlightenment. Writers like John Locke imagined the foundations of classical-liberal thought in government and society. In his Second Treatise of Civil Government, Locke expounds on the basic tenets of liberalism such as individual freedom,[2] legal equality under the law, and private property.[3] His concept of civil society was one of a contractual agreement between the citizens and a government formed to protect the fundamental rights of all persons.[4]

These ideas provided a foundation for constitutional government and the creation of rights in the private and public sphere. Discussions between philosophers in French salons and in British coffeehouses created a community now regarded as the "public sphere." This sharing of ideas between individuals without the overview of authority allowed for the creation and critique of ideas without fear of traditional authority figures. This tradition of the public sphere, or the "marketplace of ideas" is an underlying institution in Western democratic theory.

Constitutionalism competed with absolutism as a source of central, government power beginning the 17th century. In 1688, constitutionalism was codified in England during the ascension of William and Mary to the throne. An English Bill of Rights was also adopted. The French Revolution of 1789 replaced the absolutist tradition of the French Monarchy. American independence established a constitution (originally the Articles of Confederation and later the Constitution of 1787) and articles like the Declaration of Independence echoed themes of social contract theory.

The Enlightenment, its writers, and its ideas are considered to have had influenced both the American and French revolutions in the late 18th century. These revolutions were unlike their predecessors. Both countries shed their ruling monarchies in favor of a republican system. Both were also revolutions by and for the people, not a military coup d'état, invasion, or reformist movement. Both countries established Constitutions, recognized equality under the law, and recognized a number of liberties afforded to all individuals. These Enlightened revolutions are thought to have changed the definition of revolution because of the means and goals of both the American and French peoples.

The American Revolution began over general discontent of British economic and military policy in the new world. In 1776, Jefferson's Declaration of Independence stated the rights of the people to “throw off such Government,” the British government, in the event that their laws overstepped the natural rights and liberties of its subjects. This rhetoric stems directly from John Locke's treatise on social contracts and the role of government in the lives of its subjects.

The French Revolution began as a movement of the Third Estate for representation by numbers of individuals rather than a single vote per Estate (Of the three Estates-General, the Third Estate, French commoners, represented over 90% of the population). In addition, it was significantly spawned by anti-clericalism/atheism.[5] The 1789 meeting of the Estates-General deteriorated when the demands for democratic representation were not met. The Third Estate quickly formed itself into the General Assembly and established the French Republic. The French adopted a vision more closely associated with Rousseau's work The Social Contract. This vision of French republicanism dictated that the participation of all citizens in the government would create a “general will” which would dictate policy and law.

Unfortunately, the French Revolution deteriorated after 1793 with the execution of King Louis XVI and the emergence of Maximilien Robespierre and other hardliners in the French Assembly. Rousseau's famous lines in his work state that "whoever refuses to obey the general will shall be compelled to do so by the whole body. This means nothing less than that he will be forced to be free."[6] Robespierre took this quite literally to build a homogeneous state and restore order to the nation. There were many dissenters who only joined the revolutionary cause to lower taxes and were unhappy with radical social reform. Thus the Reign of Terror began and the French Republic deteriorated into arguably the world's first totalitarian regime. The ascension of Napoleon to power marked a restoration of order and a more conservative movement.

Intellectually the Enlightenment was identified with the French "philosophes" who aggressively spread the new gospel of reason. They were a brilliant collection of scientists, philosophers and writers including Voltaire, Montesquieu, Holbach, Condorcet, Denis Diderot, Buffon, Turgot and Jean-Jacques Rousseau in France. Other major leaders included David Hume, Adam Smith and several others in Scotland; John Locke, Edward Gibbon, Samuel Johnson and Jeremy Bentham in England; Samuel Pufendorf in Germany;[7] and Johann Herder, Gotthold Lessing and Immanuel Kant in Prussia.

Philosophers were endorsed by "enlightened despots"—rulers who tried to impose reform by authoritarian means, including Joseph II of the Holy Roman Empire (Austria), Frederick II of Prussia, Catherine II of Russia, and Charles III of Spain. Despite heading absolutist rather than constitutional governments, these rulers are considered enlightened because of policies and laws enacted during their rule. For example, during his rule, Joseph II abolished hereditary servitude (serfdom) and enacted the Edict of Toleration that extended civil rights to non-Catholics and Jews.


In America the leading Enlightenment thinkers were Benjamin Franklin (who later rejected deism), Thomas Jefferson (along with James Monroe the least Christian of the Founding Fathers) and James Madison (who cited Enlightenment thinkers in his Federalist Papers). Others, such as the Rev. Jonathan Edwards and Rev. John Witherspoon, were devout and brilliant Christians who were original in their sermons and writings.

American thinkers read deeply in European thought but did not share the anti-religious views typical of European intellectuals. Because the established churches in the colonies were relatively weak and not politically powerful, American thinkers seldom attacked them[8] and were able to incorporate and build on Christian faith more easily than their European counterparts.

Advances in science had led to principles and laws that were knowable and unchanging as described within a naturalistic framework. The advances in mathematics and chemistry were especially strong. This idea of knowledge that could be observed apart from a direct explanation dealing with God led to a change in philosophical ideals, where man could shape and determine his own destiny including areas outside of science such as social and political realities. In a sense mans' view of his own ability to bring about change and a trust in himself to determine what that change needed to be crystallized in the thought process of the times among the philosophical elite.

Writers during the Enlightenment assumed that all branches of science could emulate the achievements in physics of Isaac Newton, through a systematic and logical approach.

Some of the Enlightenment leaders of the period challenged traditional Christianity as they adopted God in a deist form that saw his role as the clockmaker, not the personal guide. While much of the population of the times remained Christian in terms of performing traditional rituals, deism took root in England, France, and the American colonies. Historians have pointed out that argues that belief in Christianity continued to flourish at the grassroots level.[9]

Pietism was a new and powerful religious movement that emerged among Lutheran and Reformed circles, especially in Germany. It stressed a vision of individual rebirth as opposed to ritual and theology, with stress on individual moral behavior. Pietism promoted revivals and missionary activism to convert the world to Christ. American versions of pietism include the revivals of the First Great Awakening and was especially manifest in the rapid growth of Baptist and Methodist churches. The First Great Awakening launched evangelicalism in America.[10]

Politically the French Revolution of the 1790s ended the movement. Culturally, the rise of Romanticism, with its quest for the unknown future, displaced classical Enlightenment forms, especially in music, painting, literature and philosophy, after 1810.

In a deeper sense, the ideas and ways of thought of the Enlightenment, especially regarding the value of science and systematic inquiry, have become a permanent part of the modern world. Many ideas and methods of the Enlightenment are still with us, and conservatives especially admire the work of Montesquieu and Smith, as well as the Americans Franklin, Jefferson, Hamilton and Madison.

Opposition to the spirit of the Enlightenment was led by intellectuals such as Edmund Burke in Britain, who opposed the French Revolution and exalted the bonds of tradition. Opposition escalated in the Romantic era after 1810. In Germany, Herder rejected the French love of abstract ideas in favor of the genius of the German people for instinct and poetry. Important counter-Enlightenment historians included Scottish conservative Thomas Carlyle, and French scholars Ernest Renan and Hippolyte Taine. In the 20th century, Italian philosopher Benedetto Croce and German historian Oswald Spengler were notable opponents of the French Revolution and the idea of universal reason.