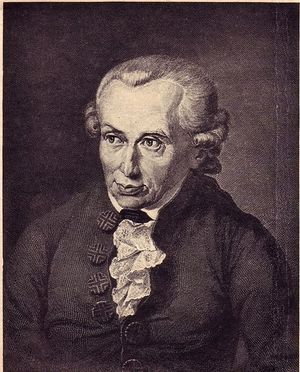 Immanuel Kant (1724–1804) was a German philosopher. Kant was among the last of the major Enlightenment thinkers, and was one of the most influential intellectuals in world history. Karl Marx named Kant to be in effect the political philosopher of the French Revolution.[1]

Born in Königsberg, Kant started his life work in philosophy from the works of David Hume, who awakened Kant from his "dogmatic slumber" and led him to make his "Copernican revolution in philosophy."[2] He also held some support for the French Revolution, including its violent excesses, due to it promoting human freedom, and considered it the crowning event of his life.[3]

In his A Critique of Pure Reason Kant examined pure reason as a basis of knowledge. The problem Hume had left Kant was a sharp divide between the a priori (things that can be known without experience) and the a posteriori (things that could only be known with experience) together with a devastating critique of induction. Hume insisted that a priori knowledge was entirely analytic (did not speak of the world) and that the sense data of our experience could never support a proposition that went beyond that experience. Such a position leads to a radical and absolute skepticism about even the possibility of knowledge. "A Critique of Pure Reason" seeks to counteract that skepticism by establishing the existence of synthetic a priori truths, truths that speak of the world but that are known logically prior to looking at the world. To establish those truths Kant looked at the way reason pictures the world. No reasoning being can have an experience other than one that involves time and space. In common language in order to see something it has to be somewhere (i.e. in space) and it has to be there at sometime (i.e. in time). Time and space are necessary conditions of all experience and, thus, we can know of their existence logically prior to any particular experience.

Having established time and space as necessary preconditions of experience Kant proceeded to question how reason must operate on the experiences presented to it. In this part of the work, Kant establishes several "categories" through which reason operates, categories that effect the conclusions that reason must come to.

Kant also suggested a material origin for the solar system (prior to Kant, the origin of the solar system was considered to be immaterial and possibly even a priori). Kant's own suggestion for a moral daily life was the categorical imperative: Act only according to that maxim whereby you can at the same time will that it should become a universal law. It does not mean that an act is moral only if it works as a rule for everyone as that is consequentialist. Kant uses the example of suicide out of self-love being wrong in that it is contradictory to love oneself and want to commit suicide. Thus, the maxim is contradictory and cannot be a universal law. A problem does exist regarding the potential situation where duties would conflict. If a murderer asks you where someone is hiding, one is bound by duty to both tell them where the other is hiding, and to not tell them as the other would surely die. In this instance, not lying is a maxim as is not doing harm to others. The Categorical Imperative gives no instruction on what to do in this situation. One must look to the freedom of the will Kant predicates upon all rational creatures. The freedom of the will is key to possessing the ability to understand and act in accord with the moral law that Kant offers a secondary rule—never act in a way that would abridge or disrespect the freedom of the will in the other. To solve the dilemma above, one would lie to the murderer, as to not would be both to violate the freedom of the will in the other, and the categorical imperative. The categorical imperative can be contrasted with the hypothetical imperative, which says that you should act according to any maxim which might possibly be willed. He remained single throughout his life, though he said, toward the end of it, that he could not afford a wife in his youth and did not need one in his old age. Kant's aim was to make philosophy truly scientific.

The empiricist Alfred Nobel however found Kant's metaphysics hard to digest and ventured on an ironical remark: "Kant's style is so heavy that after his pure reason the reader longs for unreasonableness."[4]

Although assumed to counter Hume's idea of pure reason, there is evidence to suggest that Kant's treatise was meant to advance Hume's ideas.[5]

Philosopher of Protestantism vs. of Evolutionary thought

Kant was raised and died a Lutheran but questioned and analyzed his own faith. Kant transformed Protestantism from a dependence on a literal interpretation of the Bible into a dependence on each person's own mind as the ultimate religious authority. He shifted the faith away from the Bible and towards a dogmatic voluntarism and sentimentalism. Phenomena "are nothing but ideas, and cannot exist at all beyond our minds." He concluded that revelation and churches can at best be "adventitious aids."

Protestant Lutheran theologians such as Slovak Jozef Rohacek, however, regarded Kant as a strong anti-Christian personality that significantly helped extremist Evolutionism[note 1] towards undreamed-of expansion. Rohacek argues that although Kant's evolutionary philosophy (expressed in such evolutionary ideas such as, for example, cursory speculations on human evolution[7][note 2][9][10] and contribution to the Kant-Laplace nebular hypothesis) was in many aspects nothing pioneering, as the general idea of Evolution is as old as philosophy itself,[note 3] yet his ideas gained unparallelled popularity and he achieved with his powerful spirit and categorical imperative to undermine the faith of many people or even of scholars who were not well-versed in the Bible and its truths. Kant's ethic is based on so-called autonomism, i.e. the view that the ultimate goal of a man's moral behavior is the man itself. Kant, for whom God was only an idea,[note 4] is perceived as a forerunner for later Darwin's evolutionary thought.[6]

In her book Hitler’s Philosophers, Y. Sherratt points out that Kant “decreed in fact that pure morality sought ‘the euthanasia of Judaism.’”[11] This seems to be an extension to Kant's belief that the golden rule was self-evident and thus provable by reason alone, and so rejecting it was rejecting reason.[12] Hitler, following Nietzsche, did not share Kant's belief in the golden rule.

The Theory of Island Universes

Edwin Hubble maintained that five years after Thomas Wright published his views on the stellar system in 1750, Kant developed his speculations further into a form that was immediately accepted and which persisted unchanged as conception of eventually so called theory of island of universes until "recent years" (from perspective of 1936).[13]

Immanuel Kant ultimately advocated for globalization and globalism in his 1795 treatise Perpetual Peace: A Philosophical Sketch, where he advocated that, in the name of peace, war is to be rendered outlawed and that a nebulous world government that was governed by mere treaties would replace it, and also implied some socialistic beliefs by denouncing the accumulation of wealth as "a threat to peace". Elements of this view were ultimately adopted by Woodrow Wilson for his League of Nations concept, which ironically came about after Germany lost World War I, as well as being adopted for the United Nations and European Union. There were several key flaws in his view, however: Namely, even if one could outlaw war, it is next to impossible to actually enforce said law.[14] Additionally, this view assumes that the Idea of Progress – a related philosophical view that Kant also promoted – is correct, even though it actually has numerous flaws.

"Two things fill the mind with ever-increasing wonder and awe, the more often and the more intensely the mind of thought is drawn to them: the starry heavens above me and the moral law within me." Critique of Practical Reason, 1799.