Caffeine is natural plant alkaloid found in the coffee bean, the tea leaf, the kola nut, and the cacao podin. Coffee, tea, cocoa, chocolate, soft drinks, and some drugs all contain caffeine, and when consumed, it behaves as a central nervous system stimulant. Pure caffeine is odorless and has a bitter taste. Caffeine, in the form of tea or coffee, is the worlds most widely used and popular drug.[1]

In the liver, caffeine is metabolized into three main compounds

Caffeine enters the bloodstream through absorption in the stomach and small intestine and, like other psychoactive compounds (e.g. nicotine and ethanol), easily crosses the blood brain barrier. Caffeine's main biochemical affect is competitive inhibition of adenosine receptors (antagonist action). Adenosine, which shares a similar chemical structure with caffeine, in the central nervous system is important for promoting sleep. Effects may be seen within 15 minutes of consumption. Once in the body, caffeine will stay around for hours: it takes about six hours for one half of the caffeine to be eliminated.

Some studies show that caffeine causes physical dependence (addiction). One way to tell if someone "needs" that cup of coffee or bottle of Mountain Dew is to take it away from them and then see if they have any withdrawal symptoms. Typical withdrawal symptoms associated with caffeine are the headaches, fatigue, and muscle pains. These symptoms can occur within 24 hours after the last dose of caffeine. One study has stated that the minimum consumption of caffeine for physical dependence is 4 cups of coffee per day. Other studies say that a few more cups of coffee are needed to develop dependence.

Excessive caffeine consumption over time can lead to kidney stones. 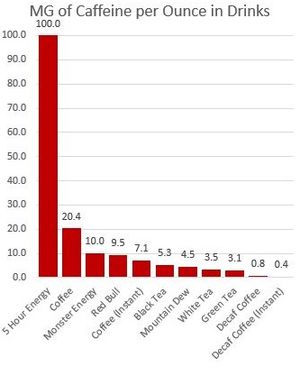