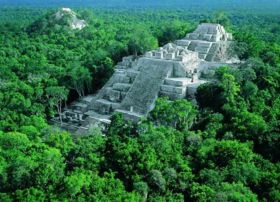 Calakmul is an ancient Mayan city in Campeche, Mexico. It is located in the southern center of the Yucatán Peninsula, set deep in the tropical forest of the "Tierras Bajas" of easthern Mexico. The site is listed as a UNESCO World Heritage Site.

Explorer Cyrus Longworth Lundell discovered Calakmul in 1931. Lundell called it "the city of two adjacent mounds" from the Mayan words ca (two), lak (nearby) and mul (mound) or the "Two Adjacent Pyramids". Later the city was explored by American archaeologist William J. Folan between 1984 and 1994.

Calakmul played a key role for more than twelve centuries. The site contains several stone buildings occupying an area of 44 square miles and has more than 6,000 structures. This seems to suggest that Calakmul used to be the largest Mayan city of its time, bigger than its rival Tikal. The structures are pyramids, temples and adoratorios, a ball game, palaces and house-room built with figured stones. The architectural characteristics of the constructions correspond to the classic period. Some stelae at Calakmul are over 6 feet tall and are completely carved (hieroglyphic). The stelae are outstanding examples of mayan art; 103 have been found so far.

The biggest pyramid has over 120 feet of high, perhaps the largest of all Mayan pyramids. Another building, for its orientation and its design, suggests that it was an "Observatory Temple".

Calakmul and Tikal were neighbours and important Maya centers. Chichen Itza, another important city, was built after their collapse.

"Tikal and Calakmul hated each other's guts, fought wars, captured each other's kings and more to the point they generated alliances around them." Professor Peter Mathews from La Trobe University in Australia.

Calakmul is situated in the middle of the Calakmul biosphere reserve, the largest tropical forest reserve in Mexico (1,800,000 acres).

Ancient Maya City and Protected Tropical Forests of Calakmul, Campeche, is a renomination and extension of the existing 3,000 ha. cultural World Heritage property, Ancient Maya City of Calakmul, Campeche. It now becomes mixed natural and cultural property. The site is located in the central/southern portion of the Yucatan Peninsula, in southern Mexico and includes the remains of the important Maya city Calakmul, set deep in the tropical forest of the Tierras Bajas. The city played a key role in the history of this region for more than 12 centuries and is characterized by well-preserved structures providing a vivid picture of life in an ancient Maya capital. [1]

LUNDELL, Cyrus Longworth 1933. Archeological discoveries in the Maya area. Proceedings of the American Philosophical Society 72, No. 3:147-179.

ERICSON, Jenny, Mark S. Freudenberger, and Eckart Boege. 1999. Population Dynamics, Migration, and the Future of the Calakmul Biosphere Reserve. Occasional Paper No.1. Washington, DC: American Association for the Advance-ment of Science and Program on Population and Sustainable Development.