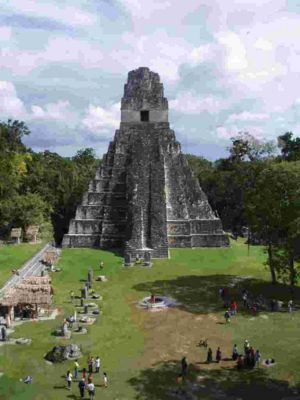 Tikal, located in the northern Peten region of Guatemala in Central America was one of the largest cities in the Mayan civilization and is now an important tourist center. It was rediscovered in 1848 by Modesto Méndez and Ambrosio Tut.

Tikal is one of the most impressive architectural achievements of the Mayan civilization. It has five imposing pyramids of which are 200 ft. in height. Buildings include temples, shrines, ceremonial platforms, terraces, religious monuments with hieroglyphic inscriptions, dwellings, causeways, ball courts, and plazas, most are interconnected with aqueducts. The Temple of the Grand Jaguar, the Temple of the Inscriptions, the North Acropolis of King Moon Double Comb and the courtyards of the Great Plaza are remarkable. The Great Plaza has two main pyramids facing one another. The main temples of Tikal are all precisely aligned consistent with precise Mayan astronomical observations.

Calakmul, the largest city in the Mayan world, was its rival. As Professor Peter Mathews says: Tikal and Calakmul hated each other's guts, fought wars, captured each other's kings and more to the point they generated alliances around them. Uaxactún is another Maya site close to Tikal, with similar size and importance.

By the 10th century Tikal was completely deserted.

Tikal, as one of the archaeological wonders of the world, is on par with sites such as Machu Picchu, Petra, Calakmul, Chichen Itza, and the Great Wall of China. In 1979 UNESCO declared the site a Cultural Heritage of Humanity.