The Temple of Kukulcan (El Castillo)
Chichén Itzá is a pre-Hispanic archaeological site in Yucatán, Mexico. The site was an important Mayan city-state through both the Late Classic and the Early Post-Classic periods.

The name (pronounced "chich-EN it-ZA") means "The mouth of the well of the Itzá" (or "At the edge of the well of the Water Sorcerers" according to some authorities) owing to the large cenote at the north of the site which was considered sacred. The site is listed as a UNESCO World Heritage Site and was recently voted one of the new Seven Wonders of the World.[1] 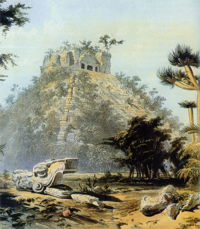 Catherwood's illustration of the The Temple of Kukulcan
Following the Spanish conquest of Yucatán in 1547 when it was mentioned by Fray Diego de Landa in his apologia, Relacion de las Cosas de Yucatan (Account of the things of Yucatan), the site was forgotten until the American explorer and diplomat John Lloyd Stevens accompanied by the British draftsman Frederick Catherwood rediscovered the site in the early 1840s. The publication of Stephens' Incidents of Travel in Yucatan in 1843 with Catherwood's illustrations revealed Chichen Itza to the world. In the 19th century many other travelers and explorers reached the site to study the buildings, including Desire Charney, Alfred P. Maudslay, Augustin le Plongeon and Teobert Maler. Edward H. Thompson, the American consul in Mérida, bought the land and explored the Sacred Cenote, recovering many objects from the well, including bones, pottery, beads, jade and gold. Most of these objects were sent abroad but some are exhibited in the Museum of Anthropology in Mérida. According to the Mayan expert Dr. Sylvanus Morley, the Itzas first settled in the area known as Old Chichen about 435 AD (Classical period) and began to construct stone buildings in the Chenes and Puuc styles between 495 and 625. The site was abandoned towards the end of the seventh century and the people migrated south to Champotón where they stayed until 968 and then retuned to settle in Chichen bringing with them a new Toltec-influenced architectonic style. This was characterized by severe building lines and ornamental motifs based on the feathered serpent-god Kukulcán (equivalent to Quetzalcoatl in the Mexican highlands).

The site contains several stone buildings occupying an area of 4 square miles. The stepped-pyramid Temple of Kukulcán (named "El Castillo" - the castle - by the Spanish), is the most well-known edifice. The exact function of many buildings were unknown to the Spanish, and names given to edifices are often because of some similarity to buildings in their own culture, such as The Nunnery or The Church. Most other names come from decorative features that have been on them. The High Priest's Temple is a small replica of "El Castillo" Pyramid; the name comes from an elite burial discovered by early excavator, the American archaeologist Edward H. Thompson (1856 - 1935). Detail of a scoring ring from the Great Ball Court

Temple of the Warriors

Great Ball Court—Temple of the Jaguars

Palace of the Sculptured Columns

Platform of Eagles and Jaguars The Temple of the Jaguars

Temple of the Large Tables

The Platform of the Skulls

House of the Deer

House of the Grinding Stones

Platform of the Tombs

Temple of the Panels

Thompson for 40 years sent back a stream of valuable artifacts and information from Chichén Itzá. His books stimulated public interest in Maya Culture. He is most famous for his work at the Sacred Well. Mayan Pyramid of Kukulkan - The Castle.