The Maya (MAH-yuh or MEYE-uh) are a people in Southern Mexico and northern Central America. They number about 9 million people, consisting of about 30 different groups. The Maya formed one of the great Mesoamerican civilizations, the apogee of their civilization was from A.D. 300 to 900.

The Maya have been called the "Greeks of the New World" by many historians. The Maya had some knowledge of mathematics, astronomy, ritual ball games for entertainment, and the use of their complex written language. The Maya may have been the first civilization that used the concept of zero, the oldest Mayan inscriptions using a zero glyph date from the first century before Christ, but it is likely that the Mayas copied it from an earlier civilization, most likely Olmecs or Zapotecs.

The reasons for the decline of the Mayan civilization are not completely understood, but seem to be related to the destruction of the natural environment. The Maya needed trees to make stucco to cover their pyramids, which lead to erosion, which led to insufficient crops, which led the Maya to build more temples, which continued the cycle. Mayan cities were abruptly abandoned in the 800s. After this point, the Maya civilization became small villages. 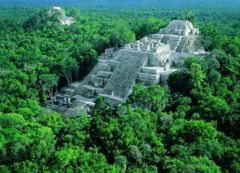 The Maya were politically formed similarly to the Greek city-states. Each city was politically independent and ruled by a king who had multiple wives. Each king had a ceremonial center containing temple pyramids, ball courts and stelae, which are tall stone statues containing a portrait on one side and glyphs on the other. Some cities politically controlled other sites, as Copan controlled Quirigua until a revolt in which the people of Quirigua beheaded the ruler of Copan, Waxaklahun Ub'a K'awiil, or 18 Rabbit. The four major sites are Palenque, Tikal, Calakmul and Copan. Later, Chichen Itza was built, but this site was built after the collapse of many others. For food, the Maya grew maize (corn), squash and beans. Like other American Indians the Maya had no coins or paper money, but sometimes traded in cacao (chocolate) beans, shells or other goods. The Maya were probably the only Mesoamerican civilization with a fully functional writing system, based on the use of hieroglyphs, although other people like the Mixtecs and the Aztecs had a comic book like writing system, that was not as fully developed as the Mayan one, and there also exist (as of yet undeciphered) Epi-Olmec and Olmec hieroglyphs.

Contrary to early beliefs, the Mayans were involved in warfare, perhaps rarely, though research indicates that, "It may well be that vengeful dynastic vendettas, total destruction of cities and the enslavement of whole populations occurred throughout Maya history."[1]

The Maya religion was polytheistic and the Maya "appeased the gods" by engaging in human sacrifice and autosacrifice. Autosacrifice and the use of hallucinogenic drugs were important to the Maya religion because they allowed the use of visions, which the Maya used to speak to their ancestors. The Maya believed in creation as explained in their religious text named the "Popol Vuh." Wealthy women enjoyed some rights in the society, and in some cases were Queen when there was no male heir. The Maya wrote accordion-fold, bark paper books called codices. There are only 4 known in existence today, which are in museums in Europe. There are approximately 10,000 other pieces of Mayan writing, but not book form. Mayan writing and the ability to read their writing had been in decline for hundreds of years since the end of the classical period, but there were still some who could read and write when the Spanish arrived. The Spanish under Fray Diego de Landa burned Mayan codices on July 12, 1562 because he believed the books to be anti-Christian. De Landa claims to have burned 27 books, while others claim 99 times that number. Diego was later recalled to stand trial in Spain for excessive practices. Whatever the cause, the ability to understand the ancient script was lost shortly thereafter and it was only in the second half of the 20th century that enough progress was made in decoding the script to more fully understand the writings that have survived.

The Maya used a yearly solar calendar that was fairly precise, using 18 months and 20 days per month, with five additional unlucky days at the end, which totals to 365 days. The Maya did not take into account the additional 1/4 day, which we take into account through leap year, because it was not important for them. They additionally had a 260-day ritual calendar which worked in conjunction with the 365 day calendar to create a 52-year cycle. They also used a Long Count calendar which counts the number of days since the creation of the world on August 13, 3113 BC. This calendar returns to zero in 2012, which has caused an Apocalypse scare. However, this stems from a misunderstanding of the calendar, because the calendar is generally abbreviated to 5 places, when in reality there are over 40, so the calendar will continue after this date. The calendar is written with five numbers with a period between each, such as 5.4.3.2.1. Each of the numbers between the period represents a place, since the Maya number system was base-20. In this date, for example, the 1 represents 1 days, the 2 represents 2*20 days, the 3 represents 3*360 days, the 4 represents 4*7,200 and the 5 represents 5*144,000. Each digit except the second (2) and the last (5) goes to 19 before returning to zero. The second only goes to 18 and the last only goes to 13. The original date for the world was 13.0.0.0.0, which will be the same date on December 21, 2012, and the reason for the Apocalypse scare. Today the Mayans live in Guatemala, Belize, Southern Mexico and the western fringes of Honduras and El Salvador, with emigrant communities in the United States and the rest of Mexico. Mayan languages are still spoken by about 4 million people; the Mayan languages with the largest number of speakers are Yucatec in Mexico and K'iché in Guatemala, with up to one million speakers each. Many Mayas follow the Roman Catholic religion, often strongly mixed (syncretic) with precolumbian beliefs. In recent decades many Mayans have converted to Protestantism, especially Evangelical and Pentecostal churches.

The most famous contemporary Maya is probably Rigoberta Menchú, a Guatemalan activist who won the Nobel Peace Prize in 1992.