From Conservapedia
Jump to: navigation, search
Callisto is the outermost of the Galilean moons of Jupiter, and the second-largest moon of that primary and the third-largest natural satellite in all the solar system after Ganymede and Titan. Once considered a boring, undifferentiated lump of rock, Callisto has surprised planetary scientists at least as much as has other moons like Titan or Ganymede or Europa after the kind of close-up observation that deep-space orbiters can provide.

Simon Marius claimed to observe Jupiter and these satellites independently of Galileo and beginning five weeks earlier. However, he did not publish his findings, while Galileo published his. Furthermore, Galileo's notes were more reliable and extensive than those of Marius, which is why Ganymede and the three other satellites he observed (Io, Europa, and Callisto) are called the Galilean moons and not the Galilean-Marian moons.[1]

Galileo, for his part, called them the "Medicean planets" after the Medici family and simply numbered the moons I, II, III, and IV. The satellites carried these names for two centuries until the discovery of other moons of Jupiter made that naming system untenably confusing.

Callisto orbits Jupiter at a mean distance of about 1.9 million kilometers and takes 17 days to make a complete orbit around Jupiter (and a complete rotation on its own axis). Like other moons that orbit their primaries as closely as does Callisto, Callisto is tidally locked and keeps the same hemisphere toward Jupiter at all times. Callisto's orbit is more eccentric than those of the other Galilean moons (except for Europa), and is slightly inclined to Jupiter's equator.

Callisto does not resonate in its orbit with Ganymede and the other two Galilean moons; in fact its sidereal month is slightly more than twice as long as that of Ganymede. Callisto is, however, subject to tidal stresses on account of the eccentricity of its orbit. 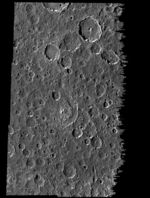 Escarpment in Valhalla region
Callisto's craters are remarkably flat, and lack the high ridges, radial rays, and central depressions observed on impact craters on other bodies like the Moon and Mercury.[8] Moreover, many of the smaller craters have been obscured, as if by subsequent impacts.[8] Some authorities hold that this relative flattening and lack of large mountains is due primarily to Callisto having an icy surface.[4]

Callisto has two very broad basins that most consider the result of repeated impacts. They are named for the two fabled homes of the Viking gods, Valhalla and Asgard.[9] Valhalla measures 3,000 km across; Asgard 1,600 km.[4] Callisto cutaway
Callisto is remarkably lightweight (1.8% of earth's mass), and its density, at 1,834 kg/m³, is consistent with an interior that has almost as much water as it has ice. Until the Galileo Project, Callisto was considered to have an undifferentiated interior. Detailed examination by the Galileo orbiter suggests an interior composed of 40% ice and 60% rock, with the percentage of rock gradually increasing with increasing depth. Unique among the Galilean moons, Callisto does not have a metallic core.

Callisto has a very weak magnetic field that causes definite perturbations in the magnetic field of Jupiter as it passes in its orbit. Magnetic fields require currents, and current in turn require either metal or an electrolytic solution.[4] The most likely explanation is that Callisto has a saltwater ocean, which according to current models lies 200 km deep to the surface and is 10 km deep.[12] Further evidence in favor of this saltwater ocean lies in the relatively flat nature of the features of the Valhalla basin. Dr. David A. Williams of Arizona State University has long held that such an ocean must exist and help absorb the shock of meteoric impacts; the recent photographs of the region support this hypothesis.[13]

Callisto and Ganymede are, according to uniformitarian theories, about the same age, and almost as old as the solar system. But the composition and surface features of Callisto and Ganymede are vastly different. Ganymede has a metallic core; Callisto has none. Ganymede's ocean is far deeper than is Callisto's. Ganymede's surface features are also far more pronounced than those of Callisto. This poses a problem for theories that insist that all processes that act on celestial bodies do so in a uniform fashion.[8]

The first close observation of Callisto was by Voyager 1 and Voyager 2. The Galileo probe visited Callisto twice, in 1998 and again in 2001, in an effort to steer it toward Io, the last of its targets.[14]

No further intensive observation of Callisto is currently planned.