From Conservapedia
Jump to: navigation, search
Trans-Neptunian Objects are objects having semi-major axes larger than that of the planet Neptune.[1]

A significant number of astronomers today insist that all trans-Neptunian objects, regardless of whether Neptune has any gravitational influence upon them, should be called Kuiper belt objects.[2][3] But today, an increasing number of astronomers distinguish the Kuiper belt from other trans-Neptunian regions, primarily using orbital characteristics as the criterion for this distinction.[4]

As sources of comets

Since 1951, when Gerard P. Kuiper published his original hypothesis concerning non-accreted icy remnants of the solar nebula, trans-Neptunian objects, by whatever name, have been held to be the source of comets, of periods long or short. 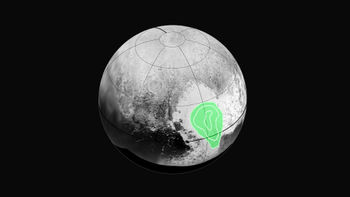 False-color image of Pluto showing frozen lake of carbon monoxide (green) in the western lobe of Tombaugh Regio (the "heart shape").
The Hydroplate Theory suggests these objects are the heaviest component of a vast quantity of water, rock and mud – amounting to as much as four percent of the original mass of the Earth – that escaped from Earth during the Great Flood. These objects formed near the Earth. Then, under the influence of the Sun, they out-gassed vast amounts of water vapor (and perhaps of thermolyzed hydrogen and/or oxygen also) and thus propelled themselves into ever-higher orbits. Most of these objects likely passed close to Jupiter (largest of the gas giants) and got a slingshot-like gravity boost to the orbits they now travel in.

Pluto, the "king of the Kuiper Belt," typifies the lot. Its greatly eccentric and significantly inclined orbit carries it inside the orbit of Neptune at its closest approach to the Sun (perihelion). In 2015, the rocket probe New Horizons passed through the Plutonian system and photographed Pluto and its moons extensively. Among other findings: a lake of frozen carbon monoxide in the western "lobe" of "Tombaugh's Heart," a great heart-shaped contiguous plain. How did this carbon monoxide form? It could only have formed from the burning of wood in a confined space. Walter T. Brown, Jr., originator of the Hydroplate Theory, suggests much of the mass of Pluto originally consisted of uprooted trees and shrubs. The heat of accretion, and the presence of hydrolyzed hydrogen and oxygen, started a fire beneath the surface. The confined space produced carbon monoxide, not carbon dioxide. Eventually this carbon monoxide broke through to the surface, condensed, fell as rain onto Tombaugh's Heart, then froze.

NASA has the photograph of Pluto showing the frozen carbon monoxide lake. But to date they have never even tried to explain it.

In addition to this latest finding, the arguments of perihelion of the twelve largest trans-Neptunian objects, including Pluto, are nearly identical. Megan Schwamb, the astronomer who noticed this remarkable confluence of findings, flatly rejected mere coincidence in a conversation she had with Brown. She said any theory of the origin of trans-Neptunian objects must explain this tight grouping of arguments of perihelion. The first-ever trans-Neptunian object to be discovered was the dwarf planet Pluto in 1930. The next was Pluto's largest satellite Charon in 1978.[5] After the discovery of object 1992 QB1, astronomers have discovered more than 800 of these objects, but not nearly as many as some astronomers have predicted. Other notable TNO's that have been discovered include:

The New Horizons rocket probe, passed through the Plutonian system in June 2015. It thus became the first rocket probe to study a Trans-Neptunian object. Mission planners hope to steer the probe to study at least two other Kuiper belt objects in addition to Pluto.