From Conservapedia
Jump to: navigation, search
Europa is the second innermost of the Galilean moons of Jupiter, and also the smallest and lightest. Europa is named for the Phoenician princess who, according to legend, gave Europe its name, and was carried off to Crete by Zeus, who had assumed the shape of a bull. Today Europa, more than any other object in the solar system, continues to be the subject of speculation as to whether it harbors extraterrestrial life.

Galileo Galilei observed Jupiter beginning on January 7, 1610, with his famous telescope. He at first thought he had discovered three stars near Jupiter, but on the next night those "stars" seemed to have moved. (Those "stars" were actually Io, Europa, and Callisto.) He continued to observe Jupiter and its companion "stars" for seven days, during which time a fourth "star" (Ganymede) appeared and all four of these objects appeared to move with Jupiter. Finally he concluded that these objects were not stars at all, but satellites of Jupiter. This was the first direct observation that provided evidence for Nicolaus Copernicus's heliocentric model of the solar system.[1]

Galileo, for his part, called them the "Medicean planets" after the Medici family and simply numbered the moons I, II, III, and IV. The satellites carried these names for two centuries until the discovery of other moons of Jupiter made that naming system untenably confusing.

Orbital resonance of Io, Europa, and Ganymede
Europa is sixth in order of all of Jupiter's moons, and orbits Jupiter at a semi-major axis of 671,100 km. Its orbit is more eccentric than that of volcanic Io and is slightly inclined to Jupiter's equator. Europa is in tidal lock (thus keeping the same face toward Jupiter as it revolves).

Europa maintains a three-part orbital resonance or Laplace resonance with Io and Ganymede. These three satellites complete their orbits around Jupiter in the ratio 1:2:4. They also conjoin with one another at their apsides, in a mutually self-correcting manner that allows the resonance to persist. (Most such resonances are unstable and end with one or all bodies changing their orbits.)

The origin of the resonance itself is controversial. Peale and Lee, in 2002, presented a model suggesting that this resonance is primordial and thus was part of the Jovian system since its formation.[10] Their model, however, derives from the nebular hypothesis of the formation of the solar system and thus depends on uniformitarian assumptions. Showman and Malhotra suggest a model by which the resonance developed after the solar system had formed.[11]

Most scientists hold that this resonance make Europa warmer than it otherwise would be. This, they say, would explain the persistence of a liquid water ocean on Europa, though it should be far too cold for this.[2] More to the point, the same tidal flexion that might be heating Europa is cited as the cause of the irregular striations observed on Europa's surface.[8]

Europa cutaway
At 1,560.8 km in radius, Europa is the fifteenth largest body in the solar system.[8] It is very lightly cratered and thus "geologically young" by uniformitarian standards;[2] some authorities suggest an apparent age of 30 million Julian years.[8] Indeed, only three craters larger than 5 km in diameter are known to exist on Europa's surface.[2][6]

Europa is likely surfaced with water ice and rock, with a 50-km-deep subterranean ocean deep to this, resting on a silicate floor that surrounds a metallic core. The surface has multiple dark streaks, some measuring 20 km broad. Their origin is uncertain but suspected to be volcanic or geothermal.[2]

Detailed measurements by the spacecraft Galileo (December 19, 1996[9]) revealed that Europa does have its own magnetic field, though it is very weak—only 2.4 milligauss at its equator. This corresponds to a magnetic dipole moment of 9.13 * 1018 N-m/T. (The dipole is oblique to the currents of the magnetic field of Jupiter, and thus it is more likely internal than external.[9]) Europa's mass suggests a magnetic dipole moment at creation of 1.13 * 1022 N-m/T, according to the Russell Humphreys magnetic-field model.[12] Thus the decay time for this field is 861.93 Julian years, and the half-life is 597.45 Julian years. All of the above are consistent with Europa having a small but significantly conductive core and possibly a liquid ocean holding electrolytes in solution.

The Hubble Space Telescope has detected evidence of an "atmosphere" at pressure 10−11 bar, containing oxygen.[2][8] Most authorities do not suggest that this oxygen is biotic. Rather, they suggest that sunlight and the charged particles of Jupiter's radiation belt cause the water ice on Europa to vaporize and then to split into hydrogen and oxygen—and the hydrogen, being much lighter, tends to escape Europa's light gravity (0.135 g) and leave the oxygen.[2][8]

More recently, sulfuric acid has been found on Europa.[13] This might explain the red striations; they might be composed largely of elemental sulfur. 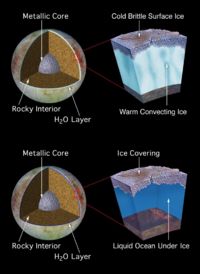 At least two models of the surface of Europa are in current circulation: the "thick ice" model and the "liquid ocean" model. The "thick ice," if present, would be convective, and this would explain the slight magnetic moment that Europa possesses. Whether Europa has "thick ice" or a liquid ocean under thin ice remains an open question.

Faced with the risk of terrestrial contamination of Europa's possible thinly-covered ocean, an event that would severely complicate any evaluation of the finding of extremophiles or other microbes on Europa, led the Galileo mission planners to make a hard decision. They deliberately crash-dived the Galileo orbiter onto Jupiter so that it would never risk crashing onto the surface of Europa.[14][15]

More than any other extraterrestrial body (except perhaps for Mars), Europa has long been the subject of intense speculation as to whether it harbors extraterrestrial life. The Voyager data fueled this speculation, which began with Richard C. Hoagland's startling proposal that Europa might have a liquid ocean that harbored life.[16] NASA authorities, except for Robert Jastrow, were unsympathetic and highly skeptical of Hoagland's theories. Arthur C. Clarke, a prominent science fiction writer, used the concept of life on Europa as a plot point for his novels 2010: Odyssey II (later adapted into the motion picture 2010: The Year We Make Contact) and 2061: Odyssey III.[17]

With the arrival of Galileo and the data from Galileo's early exploration of Europa, the speculation became even more feverish.[2][6][18] Even the finding of sulfuric acid, a harsh chemical, on Europa has not dampened that speculation.[13]

By far the most salient problem that Europa poses for uniformitarians is its apparent "geologic youth." How such "young" bodies as Europa and its inner neighbor Io came to participate in a three-part orbital resonance with a so-much-"older" body (Ganymede) begs explanation. Those wishing to assert that Io and Europa did indeed form much more recently than did Ganymede (and Callisto, the fourth member of the family of Galilean moons) must be prepared to state where those two bodies came from, if they did not form at the same time as the rest of the solar system.

At least some authorities assert that Io, for example, only looks "young" because its volcanoes are constantly filling in any impact craters that are forming. Others assert that Europa looks "young" because its subterranean liquid ocean, if it has one, is resilient and thus able to absorb most meteor impacts without forming craters.[19] Yet the persistence of the three large impact craters known to exist on Europa contradicts this explanation. Proposed submersible robotic explorer, or Hydrobot
The first spacecraft to visit the Jovian system were Pioneer 10 and Pioneer 11. Though these two probes demonstrated the feasibility of deep-space exploration, they took only a few dim and blurred images of Europa and the other Galilean moons.

Voyager 1 and Voyager 2 provided richly detailed images and other findings that made possible the first models of Europa's interior and surface composition.

In 1995, the Galileo spacecraft arrived in the Jovian system. After releasing a probe to dive into Jupiter and report on Jupiter's atmosphere, Galileo began a detailed reconnaissance of the Galilean moons. Europa was one of its first targets, on account of the relative safety of a close approach to Europa and the urgency of the speculation about Europa's composition and possible harboring of extraterrestrial life.

The proposed Jupiter Icy Moons Orbiter, which would almost certainly have had Europa as a prime target, has recently been cancelled.[20] But other proposals for further exploration remain under consideration. At least one such proposal calls for a probe to crash through the ice and release a robotic submersible to explore the water beneath the ice.[21]