Sir Charles Spencer Chaplin, KBE (London, England, 1889 - Vevey, Switzerland, December 25, 1977), was an English actor, considered to be one of the pivotal stars of the silent film era. He is associated with the popular "Little Tramp" character; a man with the toothbrush mustache, bowler hat, bamboo cane, and a funny walk. His parents were music hall performers.

His first full-length film was The Kid (1921), possibly autobiographical. He was named Knight Commander of the British Empire in 1975. Chaplin composed about 500 melodies, including "Smile" and "This is My Song".[1] Admirers included George Bernard Shaw, Marcel Proust and Sigmund Freud.

Chaplin was married four times and had a total of 11 children. He was 54 when he wed Oona O'Neill, his 4th wife; Oona was 18. 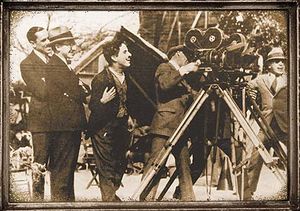 "The endearing figure of his Little Tramp was instantly recognizable around the globe and brought laughter to millions. Still is. Still does"