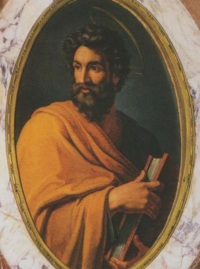 A mosaic of Jude in St. Peter's Basilica

The Epistle of Jude is the twenty-fifth book of the New Testament (NT). It is often called "the most neglected book" in the NT.[1][2] This is attributed[3] to several reasons:

Overall, the text is a warning to its recipients against teachers promoting doctrines leading to immorality. It is most well known for its "majestic closing doxology":[4] "Now to Him who is able to keep you from stumbling, And to present you faultless Before the presence of His glory with exceeding joy, To God our Savior, Who alone is wise, Be glory and majesty, Dominion and power, Both now and forever. Amen." (Jude 1:24-25)

"The vocabulary of Jude proves that the author was a Jew, saturated with the Old Testament, using Hebraisms, yet acquainted with the koine dialektos - the "common dialect". Thirteen words found in Jude do not occur elsewhere in the New Testament. Some words of the new Christian dialect appear in Jude as well as in the Pauline Epistles, but literary affinity or direct quotation cannot be proved. The style, although sometimes poetical, always evinces the severe and authoritative tone of a man of Apostolic rank, held in high honour."[5]

In the address of the Epistle the author styles himself "Jude, the servant of Jesus Christ and brother of James", indicating that the author is the half-brother of Jesus, a position which while previously strenuously denied by the Roman Catholic church in particular, is now considered the most likely.[6][7] From the style, it is certain that the author was a Jewish Christian, and is very familiar with such Jewish-apocalyptic writings as the Ascension of Moses, the Enoch Apocalypse and Jewish legends.[8] The author's reference to the apostles implies that he was not one of them, and the purpose of the epistle "surely would have constrained him to assert the authority of his apostleship if he were one. The only Judas who elsewhere in the New Testament is said to have had a brother called James is Judas the brother of the Lord. James was a half-brother of our Lord. (Matt. 13:55, Mark 6:3, Matt. 12:46-47). While during His earthly life the brethren of the Lord Jesus did not believe on Him, they are found among the disciples at the beginning of Acts and James became a foremost leader in the assembly at Jerusalem."[9]

The epistle is listed in the Muratorian fragment (c. AD 175), was known to Tertullian, and Clement of Alexandria uses proof texts from it. Origen spoke of it as "short indeed but filled with words that have been strengthened with heavenly grace." The assembly in Smyrna quotes from it in another letter written c. 155.

"The place of writing and the destination are alike unknown. The date of writing, assigned by the scholars, is between 67 and 80 AD. Peter's second epistle was written 67 - 68 AD and it may well have been that on receipt of that letter Jude wrote to those believers with whom he had a close connection and interest. The difference between the Epistle of Jude and the Second Epistle of Peter is that Peter speaks of sin whereas Jude of apostasy. Peter predicts that false teachers would arise and Jude states that they had come in."[10] Camerlynck, writing in The Catholic Encyclopedia, asserts: "Jude seems... to have been written before A.D. 70; otherwise in vv. 5-7 he would have spoken of the destruction of Jerusalem. In those verses St. Jude mentions the different punishments of prevaricators, and therefore in this exhortation to Hebrew Christians he could not have passed over in silence so dire a calamity. Moreover [textual evidence demonstrates] that the Epistle of St. Jude was written before II Peter, which latter was probably written A.D. 64. Therefore St. Jude must have been written shortly before 64... We prefer the opinion that the Epistle was written in Palestine, and probably in Jerusalem."[11] Koester, however, contends that Syria is the most likely place in which it was written.[12]

To whom the Epistle was originally addressed is not stated. It has been surmised that Jude addressed originally Jewish believers, as he mentions, prominently, Old Testament facts, besides some Jewish traditional matters."[13]

It is apparent that Jude intended to write a different letter, "about the salvation we enjoy in Jesus"; but the reports he had received regarding the doctrinal errors and immorality in the church/churches he was writing to caused him instead to address these. The first half of the epistle deals with the corruption that has entered the churches, and the second half explains how to act against it. "Jude points out the fearful consequences of such disbelief and disobedience. These Docetic dreamers indulge their animal passions regardless of the divine commands, which they explain away. Arrogance, hatred, venality, and insubordination mark them. At Christian suppers they carouse in cliques, regardless of others. They are rainless clouds, fruitless trees, barren waves, darkened stars. They are the godless rebels whom Enoch foretold, passion-driven, arrogant, mercenary. Christian believers must be on their guard against these unspiritual and animal schismatics. They must build themselves up on the foundation of their most holy faith, pray in the holy Spirit, and keep in the love of God. Some of the schismatics they may still save, but some of them they can only fear and pity."[14]

The message of the epistle, that the biggest danger to the church is from the inside, is "ever relevant and needs to be heard by the church today if it is not to be increasingly riddled with the same problems."[15]