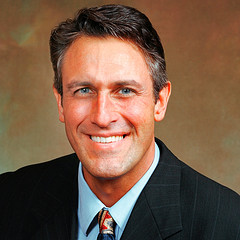 Frank Lasee was a Republican state representative from Wisconsin. He represented Wisconsin's Second Assembly District for fourteen years from 1994 to 2008.[1] In a recent interview,[1] he hinted that he might run for the House seat in Wisconsin's Eighth Congressional District.

Rep. Lasee is no stranger to controversy, and is not shy about expressing opinions that many commentators consider outrageous.[2]

In October 2006, Lasee proposed that teachers in public schools be armed, this after a number of teachers and students died in three separate gunfire incidents in Wisconsin, Colorado, and Pennsylvania in the two weeks preceding his proposal.[3] Although school officials disputed the need for such a step, the article also described the arrest, only one week prior, of a 15-year-old student who had shot a school principal to death. The outraged reaction was swift and arguably predictable.[4] Mr. Lasee, in response, said this:[1]

Lasee's position on this issue was misrepresented as part of the successful liberal campaign to oust him in 2008.

Lasee on another occasion remarked that a removal of State funding from the University of Wisconsin School of Law might be a way to continue funding the Marquette Dental School without raising taxes. Somehow a rumor began to circulate to the effect that Mr. Lasee wanted to close down the School of Law. Here again is Lasee's response to this controversy:[1]