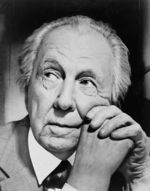 Frank Lloyd Wright (b. June 8, 1867, Richland Center, Wisconsin - 1959) was the greatest American architect, uniquely original in his work. In a career that spanned a half-century, he designed approximately 1,100 skyscrapers, hotels, homes, museums, and churches, and more than 500 of these designs were actually built.[1] His early career was studded with commercial projects, but he did not always please builders. While he fell upon hard times he turned to designing houses for wealthy people in the greater Chicago area. In the third phase of his career, he was once again welcomed as the genius he was, and added greatly to the vocabulary of modern American architecture. His work was primarily in the Midwest and West,[2] and did not care as much for New York City where his brilliant Guggenheim Museum (and a home on Staten Island) opened after his death.[3]

Wright's style is known for blending the environment into his designs, including even the use of local materials in unique ways. His Imperial Hotel in Tokyo was cleverly designed by Wright to float in mud rather than stand rigidly in a foundation, and as a result it withstood a massive earthquake in 1923 (on the day of its opening) that reduced many other structures there to rubble.[4]

Wright's buildings have been featured in movies, most notably his Maya Revival "Ennis House" in Los Angeles which provided a location for filming “Blade Runner,” “Buffy the Vampire Slayer,” “Rush Hour,” and “The Karate Kid Part III.”[5] Some consider Wright's influence to have continuing "infinite relevance."[6]

Early in his career, Wright declined an employer's luxurious invitation to learn architecture in Europe, which nearly everyone else would have grabbed.

Wright, generally acknowledged as one of the greatest architects of the 20th cent., developed a highly original approach to residential design before World War I, which became known as the "Prairie Style." His early work, executed in and around Chicago, combined open planning principles with horizontal emphasis, asymmetrical facade elevations, and broad, sheltering roofs, as seen, for example, in his Robie House (1909). Wright, who stood apart from the European-derived modernist mainstream, continued to design buildings into his old age, producing some of his finest and most idiosyncratic works, such as the Guggenheim Museum.[7]

Wright's style involved several elements, not the least of which was his strong personality. He emphasized working with the land and the locality, preferring to use building materials which were locally available, and setting his projects "in to" their surroundings, rather than "against them." He was a perfectionist and a philosopher of sorts. He would not only design a "building", but also the furniture to be used in it, if it was a dwelling, or where the desks and filing cabinets would go - and how they were to be built - if it was commercial project.

One cannot help but be amazed at the subtle beauty of almost any building he designed, whether it was a corporate headquarters, or a house in Illinois. He would design every detail of a building, incorporating highly detailed Art Deco elements, for instance in windows and furniture.

His use of light and spacing were often brilliant. But work also had a tendency toward serious functional flaws, most notably leaky roofs. He is famously quoted as saying to a client who complained that the roof leaked over his desk, "move your desk." In addition, some of his projects took a long time to build and are very costly today to maintain, such as taking ten years to construct a home of average size.

Some of Wright's designs may have been motivated his less-than-average height:

It has been said that Wright's originality was due to five factors: "nature, music, the geometry of Froebel blocks, Japanese art and architecture, and the work of Louis Sullivan."[9] Wright's buildings can be found in nearly every part of the United States today.[2]

Wright espoused a philosophy of making buildings to fit their environment, and his greatest legacy in this area is the Prairie House. They were designed with overhanging eaves, to block the sun in summer, but to allow the winter sun in through the windows. They had broad horizontal lines, intended to make them blend in with the plains where they were located. While adapted to the American prairie (hence the name), the basic outline became what we know now as the "ranch house" - perhaps renamed to spare him the tragedy of being blamed for so many modern cookie-cutter developments.

His career, and difficulties with it, were loosely adapted in the novel "The Fountainhead" by Ayn Rand.[10]

For a time, Wright was devoted to designing dwellings for the prosperous. His houses are beautiful to look at, uncomfortable to live in, and almost immediately identifiable by his characteristic signature lines. They are typified by his Prairie and Usonian styles.

Mr. Wright built his own "dream house" in Wisconsin, called "Taliesin". Here he ran his operations, using many apprentices, perhaps unfairly - although one can say, that working unaccredited for a "master" is reward in itself. Tragedy befell him here, as the first building burned down.

At the headquarters for the Larkin Company Administration Building in Buffalo, New York, we see Wright at his prime, not only blueprinting the building, but also designing the workspaces. Another famous project was the S.C. Johnson headquarters. Wright was born into a family of Unitarians and raised in rural Wisconsin.[15] Wright was not a regular churchgoer as an adult.

During the United States presidential election, 1952, Wright voted for Democrat Adlai E. Stevenson, as a picture depicts him sitting at a table, along with his wife and Stevenson himself.[16] However, in an interview with reporter Mike Wallace, Wright stated that he regretted voting for Stevenson, stating that he voted for him because he thought Stevenson was "too good for the job."[17]

There are three Frank Lloyd Wright homes in Texas, in Houston, Dallas, and Amarillo. "After sitting on the market for months at a previous list price of $3.15 million, the estate known as the 'William Thaxton House' after a Houston insurance executive, sold to an unnamed buyer on Thursday, Nov. 4 for $2.7 million," in 2021.[18]