The Pruitt-Igoe public housing project in St. Louis designed by the same architect that designed the World Trade Center. Built at a cost of $336 million ($36 million in 1954 dollars), it was dynamited in 1972 after it became too dilapidated and dangerous to live in.[1]

The Great Society (also known as the War on Poverty; poverty emerged victorious) is a set of programs instituted by President Lyndon B. Johnson and its associated legislation passed by Congress in an effort to combat poverty. It was criticized extensively by conservatives because it expanded the welfare system and increased citizen dependency on the government. It was also reputed to have destroyed the Black family unit. The Great Society era ended with Richard Nixon's election to the Presidency, who had his own grand policy agenda, New Federalism.

Michael Harrington, founder of Democratic Socialists of America (DSA), is credited with inspiring the War on Poverty with his 1962 book "The Other America."[2]

The big government spending binge of the 1960s culminated in the stagflation hangover of the 1970s and the Reaganomic reforms of the 1980s.

The Johnson administration's stated aims weere to ‘break the cycle of poverty, to make ‘taxpayers out of taxeaters,’ ‘give a hand up, not a handout.' In keeping with that theme, President Johnson said in August 1964, when the legislation was finally passed:

A subsidiary theme of the ‘war on poverty’ was that social programs were a way of heading off urban violence. Lyndon Johnson spoke of ‘conditions that breed despair and violence.’ He said: ‘All of us know what those conditions are: ignorance, discrimination, slums, poverty, disease, not enough jobs.’ Government agencies seeking to expand their budgets and extend their powers likewise encouraged the belief that social programs reduced the incidence of riots and other violence, while reduction of such programs would escalate civil disorder.

A diametrically opposite set of beliefs and predictions came from critics of the ‘war on poverty’ proposals. Senator Barry Goldwater predicted that these programs would ‘encourage poverty’ by encouraging ‘more and more people to move into the ranks of those being taken care of by the government.’ Nor did he expect expanded social programs to lead to a more harmonious society, for he saw their underlying philosophy as an ‘attempt to divide Americans’ along class lines, to ‘pigeon-hole people and make hyphenated Americans.’...Henry Hazlitt...said ‘we can expect the price tag to increase geometrically as the years go on.’”

Overall federal spending on programs for the poor escalated as eligibility rules for welfare and Social Security were loosened, the size of benefits was increased, and unemployment insurance was made more available to more people, and for longer periods of time....The number of people receiving public assistance more than doubled from 1960 to 1977. The dollar value of public housing rose nearly five-fold in a decade and the amount spent on food stamps rose more than ten-fold. All government-provided in-kind benefits increased about eight-fold from 1965 to 1969 and more than twenty-fold by 1974. Federal spending on such social welfare programs not only rose in dollar terms and in real terms, but also as a percentage of the nation’s gross national product, going from 8 percent of GNP in 1960 to 16 percent by 1974.

As for urban ghetto riots, they raged across the country during this era. Later, they declined sharply after the beginning of the Nixon administration, which opposed the whole ‘war on poverty’ approach and eventually abolished the Office of Economic Opportunity, which had been the spearhead of this program. Still later, during the eight years of the Reagan presidency–supposedly the nadir of neglect–major urban riots became virtually extinct. 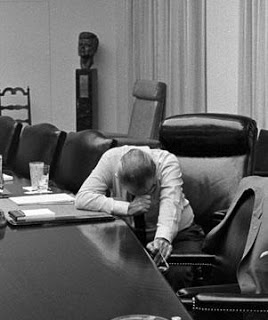 After a successful career in Democrat politics in corruption and ballot box stuffing, Johnson melts down in full view of White House photographers having achieved the highest office and bringing the country to the brink of chaos and defeat by Communists.

Dr. Thomas Sowell observed that "despite the grand myth that black economic progress began or accelerated with the passage of the civil rights laws and "war on poverty" programs of the 1960s, the cold fact is that the poverty rate among blacks fell from 87% in 1940 to 47% by 1960."[3] In the 1960s when the government started spending 22 trillion dollars, 70 cents on that dollar did not go to the poor. It went to those who served the poor. They did not ask which problems are solvable, but which ones are fundable. People were made a commodity again. There was no incentive to solve problems of the poor because the careers of those serving them were dependent upon having people to serve.

Black families disintegrated over the next 50 years. Prior to the War on Poverty, 80% of all black families had a man and a woman raising children. In the 1960s that all changed because of Democrat government policies. There was a deliberate attempt on the part of Cloward and Piven at Columbia University said one of the ways that we can emphasize the contradictions of capitalism is to separate work from income. It will make the father redundant. That's what the poverty programs and welfare programs did - separate wealth from income and made the father redundant.

The nuclear family was redefined as Eurocentric and therefore irrelevant. Christian faith was demeaned. These government programs began to attack the stigma that was present in the black community on receiving welfare. The Johnson administration opened up offices to recruit blacks into the welfare system. By the early 1970s millions of blacks were recruited into the welfare system in New York and other major cities at a time when the unemployment rate for black men was four percent.

In short, the test for whether a program was good for the country as a whole was whether those who personally benefited from it found it beneficial.

Another line of defense of failed policies has been to claim moral merit for their good intentions ....Finally, it was asserted that things would have been even worse, were it not for those programs. "The question is not what the bottom line is today–with poverty up–but where would we be if we didn’t have these programs in place?" asked Professor Sheldon Danziger, director of the University of Wisconsin's Institute for Research on Poverty. "I think we’d have poverty rates over 25 percent." Even though poverty and dependency were going down for years before the "war on poverty" began, Professor Danziger chose to assert that poverty rates would have gone up. There is no possible reply to these heads-I-win-tails-you-lose assertions, except to note that they would justify any policy on any subject anywhere, regardless of its empirically observed consequences.

By 1992, more than half of all black adults had never been married, quite aside from an additional 16 percent who had been either divorced or widowed. By contrast, only 21 percent of white adults had never been married. More than half of all black children–57 percent–were living with only one parent and another 7.5 percent were not living with either parent. Thus, only a little more than a third of black children were living in traditional twoparent households. Of 190,000 black children whose parents were currently still teenagers, only 5,000 were living with both parents.

The Democrat Plantation is a concept originally considered during the Great Society, that continues to be referenced as a way to describe how, African Americans dwelling in the United States have been physically enslaved, since arriving to America from Africa, to the present-day descendants, who, are now also mentally enslaved by the Democrat Party. The concept of the Democrat Plantation, which was originally discussed during the 1960s, proliferated through the decades.[5] The Democrat coalition of the 1960s. Racist whites who benefited from New Deal welfare programs now aligned with Blacks who were beneficiaries of the War on Poverty. Republicans who wanted to cut off vote buying out of the public treasury and balance the budget were unjustly accused by both of "racism".

The War on Poverty was a set of programs instituted by President Lyndon Johnson and its associated legislation passed by Congress in an effort to supposedly combat poverty. President Johnson said,

African-Americans formed an anomalous coalition with low-income white Democrat racists who were dependent on New Deal and Great Society welfare programs.[7] Both African Americans and racist Democrats opposed Republican efforts to maintain fiscal and budgetary sanity. The coalition gave cover to bigoted Democrats to hide their racism, while accusing Republicans who wanted to balance the budget of "prejudice". Malcolm X described it this way:

Contrary to popular Democrat mythology, Alabama Democrat Governor George Wallace won the South in 1968 in a three-way contest against Nixon and Humphrey. There was no Nixon "Southern Strategy." The South continued to reject Yankee liberals (Humphrey in 1968, McGovern in 1972, Mondale in 1984, Dukakis in 1988, Kerry in 2004). At the state and local level, the Republicans made slow but steady gains. As racism in the South declined, Republicans in the South increased.[9]