From Conservapedia
(Redirected from Southern Strategy)
Jump to: navigation, search 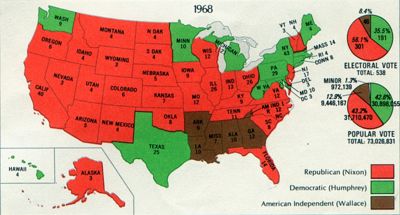 1968 electoral map. The South was carried by Democrat Gov. Geo. Wallace of Alabama who ran on a 3rd party ticket. In 1972 Nixon carried every state in the Union except Massachusetts against a radical extreme socialist. Massachusetts was the home state of Nixon's 1960 presidential rival, John Kennedy.

The Southern strategy is a Democrat conspiracy theory that alleges Richard Nixon carried Southern states in the 1968 presidential election in the wake of the bi-partisan 1964 Civil Rights Act. In fact, the South was carried by Democrat renegade George C. Wallace.

In 1972, the Democrats nominated Sen. Tom Eagleton of Missouri, a slave state. Eagleton was booted from the ticket after the convention for mental health problems and replaced with an Easterner and Kennedy in-law. In the 1972 November General Election, for the first time in almost 40 years Democrats did not have a Southerner on the ticket, and Southerners (along with the rest of the country) overwhelmingly rejected two Northern liberals at the top of their ticket. In 1976, 1992, 1996, 2008, and 2012 the South returned to the Democrat fold.

With the end of Jim Crow laws in the mid 1960s, the South became more Republican as it became less racist. The War on Poverty - which incentivized out-of-wedlock children - was designed to entice Blacks back onto the Democrat plantation.

In the movie Death of a Nation: Can We Save America a Second Time?, Dinesh D'Souza points out that this alleged strategy was actually one of winning the support of the Sun Belt rather than the Deep South.[1]

Liberals, repeatedly unpopular in the South, have tried to attribute this alleged strategy to racial politics. The reality is that liberals have always played the racist card far more often than Republicans do. Examples of this racialization are the terms "Welfare state" and "Welfare queen", even though the original welfare queen Linda Taylor was a white woman.

The pairing of Northern liberals with Southern Democrats on a presidential ticket has long been the strategic cornerstone of the Democrats' appeal to the racist vote. The promise of government handouts is appealing to many racist Democrats, irrespective of what region of the country they reside.

The Southern racist vote is vital and foundational to the Democratic party. The fact white racists vote with blacks for the same Democrat candidates to receive entitlements for whites only disguises their racism. While many Democrats use this to try to excuse their party's past, it is simply a failed guilt by association attempt used to falsely smear Republicans as racists in reality.


A large portion of the Southern Strategy Conspiracy Theory rests on an out-of-context quote lifted from a 42-minute taped recording between Atwater and Alexander P. Lamis. In the interview, Atwater is quoted as follows:[6]

As to the whole Southern strategy that Harry Dent and others put together in 1968, opposition to the Voting Rights Act would have been a central part of keeping the South. Now you don't have to do that. All that you need to do to keep the South is for Reagan to run in place on the issues that he's campaigned on since 1964, and that's fiscal conservatism, balancing the budget, cut taxes, you know, the whole cluster.

You start out in 1954 by saying, ‘N*****, n*****, n*****.’ By 1968, you can’t say ‘n*****’ — that hurts you. Backfires. So you say stuff like forced busing, states’ rights, and all that stuff. You’re getting so abstract now [that] you’re talking about cutting taxes, and all these things you’re talking about are totally economic things, and a byproduct of them is [that] blacks get hurt worse than whites. And subconsciously maybe that is part of it. I'm not saying that. But I'm saying that if it is getting that abstract, and that coded, that we are doing away with the racial problem one way or the other. You follow me—because obviously sitting around saying, "We want to cut this", is much more abstract than even the busing thing, and a h*** of a lot more abstract than "N*****, n*****". So, any way you look at it, race is coming on the back burner.[7][8][9]

Also in the interview, Atwater said:

But Reagan did not have to do a southern strategy for two reasons. Number one, race was not a dominant issue. And number two, the mainstream issues in this campaign had been, quote, southern issues since way back in the sixties. So Reagan goes out and campaigns on the issues of economics and of national defense. The whole campaign was devoid of any kind of racism, any kind of reference. And I’ll tell you another thing you all need to think about, that even surprised me, is the lack of interest, really, the lack of knowledge right now in the South among white voters about the Voting Rights Act.[10]

The bolded items above are omitted from Wikipedia's entry for the "Southern Strategy".[11] In the interview Atwater makes the point that from 1954 to 1966, race is THE dominant issue and that the only way to win on the issue of race was to be registered as a Democrat. But by the 1980's, the issue of race is resolved and what most Southerners came to care about is national defense and the economy.