Greek painting (2800 B.C. - 31 B.C.) has a significant importance in western civilization. The earliest Greek paintings that we have are from the Minoan culture on the island of Crete. The main topics are paintings on pottery, murals, and panels (fresco decoration in Knossos palaces).

Minoan art (2800 B.C. onwards), is extraordinary for its sense of movement and its emphasis on the living world. [1] Marine motifs were frequently on the Minoans artworks.

After 1600 BC the marine motif (subject) seemed to be the one of choice. Everything was painted in aquatic colors and earthy tones.[2]

In the Mycenean period, around 1500 BC, Greek potters began to make pottery with designs on it with geometric patterns or paintings of men fighting, or imaginary wild animals. 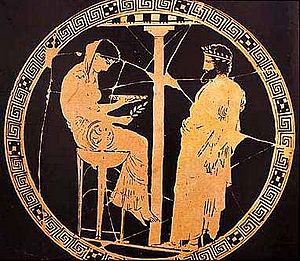 Few examples of Ancient Greece painting (c. 600-100 B.C.) have survived, originally painted on wood which has rotted away or buildings which have been destroyed; the few paintings that survive were painted on the walls of tombs, underground. Its style was very influential however on the Roman style of paintings, which spread throughout the Roman Empire into the Middle East, North Africa and Europe.

To study Greek art it is often divided in periods: Archaic, Classical and Hellenistic.

The Archaic style began when the Greeks had assimilated the styles of Egypt and the Near East. The Archaic style dealt a lot with pictorial subjects such as mythology, legends, and daily life. This gave the Greeks a wide range of subject matter. The Archaic period, like many other periods, is known mainly from vase painting. However, it wasn't limited to pottery. There were murals, frescoes, and panels as well. Ibidem

Wall paintings appear to have been produced in the Classical and Hellenistic periods. Classical Greek painters usually didn't include any background, and they focused mainly on people rather than trees or flowers in their pictures, just as in Greek vase-painting. [3]

The most copious evidence of this ancient Greek art are paintings in vases. Today, we have few evidenced, but painting was also used to enhance architecture works, and sculptures.

During the Hellenistic period art underwent dramatic transformations and evolved on the road paved previously by the Classical artist. While the Classical Greek concepts were not entirely abandoned, the artist of the Hellenistic era expanded his formal horizons with dramatic posing, sweeping lines, and high contrast of light, shadow and emotions.[4]

Painting Greek style is also found in Pompeii and Egypt.

The Flotilla Fresco, recovered from the ruins of Akrotiri, Santorini, Greece.