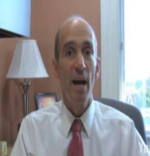 Joseph Mercola, DO is a physician, alternative medicine practitioner, and diet adviser. He is most famous for his theories on the connection between emotion and health, but also has developed a highly detailed theory for evaluating various foodstuffs and herbal and other remedies that, he maintains, are superior to the best efforts of conventional medicine. He operates a clinic in Illinois where he puts his theories into practice, and also maintains a busy web site where he routinely publishes articles of interest in alternative medicine and politics, invites virtually uncensored comment from readers, and markets his nutritional, herbal, and other remedies.

Dr. Mercola received his undergraduate degree from the University of Illinois (class of 1976) and his degree of Doctor of Osteopathy from the Chicago College of Osteopathic Medicine (class of 1982). He completed a family-practice residency in 1985 (serving as chief resident in his last year) and has been a board-certified general practitioner ever since. He currently maintains his practice license in Illinois. He is a member of the American Association of Physicians and Surgeons, and has a lengthy list of publication credits.[1]

He first suspected that conventional medicine might be seriously flawed when he almost lost his life to cancer in the 1990s. He began his web site in 1997[1] and is an almost militant proponent of alternative medicine over conventional. He boasts that his site is among the top 10 health-related sites in the United States as regards the number of site visits.[1]

Dr. Mercola believes that much of what compromises the health of most people is a combination of lack of understanding of the role of emotions in influencing health, a diet compromised by bad individual choices and worse modern agricultural practices, and a paradigm to which most conventional doctors subscribe, that emphasizes after-the-fact pill-taking over before-the-fact prevention and common sense. His usual recommendations, which he mentions frequently in the many articles on his site, are these:

No one diet is appropriate for everyone. The patient must understand what sorts of foods, when he eats them, make him feel the best afterward. He has defined three specific nutritional types in which he classifies all his patients: the protein type, the carbohydrate type, and the mixed type, in which neither protein nor carbohydrates should predominate.

Dr. Mercola strongly advises against the consumption of sugar, and particularly processed sugar. In fact, he advises his patients to prefer vegetables to fruits, because vegetables contain far less natural sugar than do fruits.

He also advises against the consumption of grains in any form, a position that other alternative-health diet advisers do not share. He believes that agriculture is a relatively recent invention in human history (which, he believes, goes back millions of years, leading him to believe that our bodies are not properly "evolved" to handle a diet of grain).

In general, he advises his patients to avoid preparing any form of meat over an open flame, in the fear that the flame can produce a carcinogen on the surface of the meat.

Finally, he warns people to avoid buying, preparing, or storing food in any form of plastic, in the fear that carcinogens might leach from the plastic into the food.

He is not a vegetarian, but he definitely recommends that all meat be raised under conditions that come as close as possible to the animal's life in the wild. Thus he insists that people buy free-range beef or poultry, and wild-caught fish. His concerns are twofold: the nutritive value of the meat, and the pollution that the meat might suffer as the animal is raised in an often overcrowded environment.

He has lately become an advocate of the right to buy milk raw, that is to say, not pasteurized. He explains his position thus: He would never recommend drinking the product of a commercial dairy, with its overcrowded and unclean conditions, were it not pasteurized. But a dairyman who regularly moves his cows to pasture, where they can graze freely and not pollute one another's grass, can produce a product which, if drunk raw, would contain healthy quantities of symbiotic bacteria and would not contain pathogens. A number of States within the United States already allow consumers to buy raw milk within their borders. Dr. Mercola encourages his site visitors in the remaining States to petition their respective legislatures to allow them a similar freedom.

Dr. Mercola does market a limited line of supplements, including "probiotic" supplements that supply a symbiotic bacterium (Bacillus spirogenes) that can survive the passage through the stomach and replace the bacteria that are often killed by antibiotic therapy. But in general he advises his readers to adjust their diets to acquire their daily vitamin and mineral rations in their food, not in a tablet or capsule. To do otherwise is to risk, in some cases, underabsorption, and in others, an overdose.

He frequently denounces conventional medicine for the number of drugs that medical practitioners have been forced to abandon because of their side effects, and other drugs that have been withdrawn from the market following findings of fraudulent reporting of clinical trials. Nor does he limit his criticism to pharmaceuticals only; he frequently questions the value of certain frequent elective surgery procedures, especially those designed to mitigate the effects of arthritis.

In particular, he mentions chemotherapy in the treatment of cancer only to condemn it in the strongest possible terms. To this, however, he allows one exception: the treatment of lymphoma, for which he freely admits that current chemotherapeutic regimens have often been found remarkably effective. Nevertheless, he touts his dietary theories as offering the best hope for the prevention of cancer, and even holding out some hope for stimulating the body's own immune system to combat and destroy cancer, if it is not already too advanced upon discovery.

Dr. Mercola recommends against getting any sort of vaccine. He especially decries the routine practice of vaccinating against influenza. He notes that the Centers for Disease Control often misidentify the particular strain of influenza virus likely to be most prevalent in any given year, and charges that vaccines depress immune function. He also denounces as absurd the notion of trying to make a vaccine against every conceivable pathogen, including, most recently, the pathogen responsible for dental caries.

Instead, he says that a healthy immune system, made healthy by good dietary choices (and avoiding sugar, which he says is an immune suppressant), should obviate the need for most vaccines. Changes in behavior should render a patient less likely to come into contact with other pathogens.

Dr. Mercola subscribes to the theory that radio-frequency carrier waves can perturb the structure of cell membranes and thus increase the risk of cancer in any patient exposed to a high dose of radio-frequency transmissions. Thus he decries the current popularity of cellular telephones and has repeatedly expressed his fear that the modern cellphone will become the cigarette of the twenty-first century. As evidence, he cites reports (that, so far, only he carries) of higher incidences of cancer in neighborhoods where cellular radio towers now stand.

However, he concedes that the cellphone has become irreplaceable in modern society. And so rather than agitate for a ban on cellphones, he has developed a set of recommendations to mitigate the bad effects that he still believes that cellphones have. They are:

On April 12, 2008, Dr. Mercola commented on the then-upcoming release of Ben Stein's documentary motion picture, Expelled: No Intelligence Allowed. His commentaries on his theories make clear that he is an old-earth evolutionist. Yet far from denouncing this film, he accepted Ben Stein's thesis as probably correct, and cimpared it to other examples of attempted suppression of controversial opinions, both scientific and political.

He then asked a very bold and forthright question of the film's detractors: "What are you afraid of?" He suggested that no one ought to be afraid of research that suggests that one ought to change one's worldview. He went so far as to admit the possibility that our DNA might indeed be the result of an intelligent design and seemed to think that the idea of such design comported well with his total-health theories. More to the point, he sternly rebuked those who would stifle debate, in or against whatever cause. In summary, he took no side in the debate, but rather decried any notion by either side to suppress the other.

Consistent with that, he opened his article to comment. The comments, often scathing, have run fifty-fifty on both sides of whether Expelled is a good film or not, and Dr. Mercola does not seem to have censored any content other than what might be pointlessly obscene.[3]