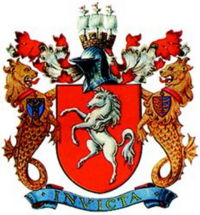 Kent (derivation from ancient Celtic is either “coastal district” or “land of armies” - the Romans called it Cantia.) is a county in the extreme south-east ofEngland. It is bounded on the north by the Thames Estuary, to the east and south by the English Channel to the west and north-west by Surrey, East Sussex and London.

It is the closest part of England to the European mainland and, therefore, has been the most favoured point of arrival for visitors and invaders alike from before history. Julius Caesar landed there in 55 BC as did the Germanic invader/settlers, the Jutes, Tradition has it that two Jutish brothers, Hengist and Horsa, settled there and founded the Kingdom of Kent with its capital at Canterbury in the 5th century AD. History is more complicated than tradition with evidence of Romano-British revival, traces of lingering Christianity and the survival in parts of Roman administrative divisions among the detritus of Germanic invaders and signs that the land was not always united during this shadowy era. By the late 6th century, though, the Kingdom of Kent under Ӕthelbert, controlled much of southern England. It would be Bertha, Ӕthelbert ‘s Frankish Christian wife, who would welcome Saint Augustine of Canterbury in AD 597. The Kentish kings held overlordship of much of the island south of the River Humber for much of the 6th and 7th centuries .

Kent disappeared as an independent kingdom in 825 although it retained he prestige associated with the pre-eminence of the See of Canterbury. Canterbury is still central in the world-wide Anglican communion.

Today the ports of Dover and Folkestone are the main surface arrival and departure points for the country. As well as the ports, the Channel Tunnel appears above ground just north of Folkestone.

Kent has a relatively equable climate, has good soil and very little high ground to speak of. It is a well-known fruit and vegetable growing area and has excellent vineyards, earning it praise as “the garden of England”.