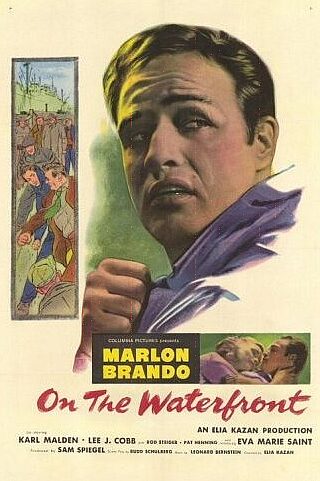 Marlon Brando, Jr. (born April 3, 1924, in Omaha, Nebraska; d. July 1, 2004, in Los Angeles) was an American actor who was featured in some of the most well-known Hollywood films of the second half of the twentieth century. Brando's idiosyncratic use of Constantin Stanislavski's "emotional memory" technique of acting had a profound influence on his generation of actors as well as subsequent ones. Elia Kazan said Brando challenged "the whole system of politeness and good nature and good ethics and everything else."[1]

Brando began his acting career in the theater, debuting on Broadway in 1944 in I Remember Mama. Three years later his performance as Stanley Kowalski in the Broadway production of Tennessee Williams' A Streetcar Named Desire and in the film version of the play (1951) catapulted the young actor to stardom and acclaim, including an Academy Award nomination for Best Actor.

Other notable films starring Brando include

Brando plays Terry Malloy, who under the inspiration of a Catholic priest (Father Barry, played by Karl Malden), becomes a Christ-like figure. Betrayed by his brother and almost killed by the gang, he finds the strength to overcome and redeem his people from the slavery to the mobsters who run the waterfront. In stunning contrast to the liberals who kept silent about the Communist subversion in Hollywood, the film portrays the informer as the hero; liberal Hollywood never forgave director Elia Kazan for his stunning film.