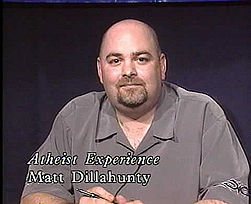 Matt Dillahunty currently serves as the president of the Atheist Community of Austin. In addition, Mr. Dillahunty also serves as a host of the internet radio show "Non-Prophets Radio" and of the Austin television cable access show "The Atheist Experience". According to his page at Atheist Nexus, Mr. Dillahunty works in the software field.[1] As of June 9, 2016, Dillahunty serves on the board of directors for the American Atheists organization.

Matt Dillahunty was raised a Southern Baptist but now likes the works of non-Christians such as Robert Ingersoll, Voltaire, Dan Barker, Richard Dawkins and Farrell Till.[2]

The popular Christian YouTube video maker Shockofgod has challenged Texas YouTube atheists Matt Dillahunty and Aron Ra to answer the 15 questions for evolutionists which are featured in Creation Ministries International's Question evolution! campaign. Dillahunty is unable to satisfactorily answer the questions. Previously, Shockofgod and his fans asked Matt Dillahunty to provide "proof and evidence that atheism is accurate and correct" and Dillahunty was unable to do so.[3][4][5]

Thunderf00t is one of the more popular YouTube atheists/evolutionist. Thunderf00t debated the American Christian apologist and evangelist Ray Comfort and the debate did not go well for him and he was nervous during the discussion/debate. Matt Dillahunty indicated he was "disappointed" in Thunderf00t's debate performance and referred to his debate performance as "weak sauce".[6]

Matt Dillahunty on the events surrounding Thunderf00t's removal from Freethoughtblogs

According to the atheist Matt Dillahunty Thunderf00t acted dishonestly and inappropriately subsequent to his removal from Freethoughtblogs and he had "gone off the deep end".[7]