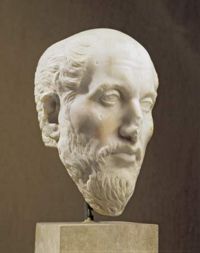 Plotinus of Lycopolis (Asiut, Egypt, ca. 204 – 270) was a Roman philosopher, but his education was completely Greek. He is considered the founder of Neoplatonism. His theory includes the "concepts", "entities" or "principles": "the One", "the Intelligence", and "the Soul".

Plotinus stresses that happiness is beyond anything physical and every human being possess the things necessary to constitute happiness. (Enneads I.4.4) This issue of happiness has had an important influence in Western thought.

Plotinus, holding to his principle that one cannot act without being affected by that which one acts upon, declares that the Soul, in its lower part, undergoes the drama of existence, suffers, forgets, falls into vice, etc., while the higher part remains unaffected, and persists in governing, without flaw, the Cosmos, while ensuring that all individual, embodied souls return, eventually, to their divine and true state within the Intelligible Realm. Moreover, since every embodied soul forgets, to some extent, its origin in the Divine Realm, the drama of return consists of three distinct steps: the cultivation of Virtue, which reminds the soul of the divine Beauty; the practice of Dialectic, which instructs or informs the soul concerning its priors and the true nature of existence; and finally, Contemplation, which is the proper act and mode of existence of the soul. [1]

His student, Porphyry (ca. 232-304), edited the Enneads, which are his complete treatises; they comprise 54 treatises in Greek, 6 groups of 9 books each.

Beauty addresses itself chiefly to sight; but there is a beauty for the hearing too, as in certain combinations of words and in all kinds of music, for melodies and cadences are beautiful; and minds that lift themselves above the realm of sense to a higher order are aware of beauty in the conduct of life, in actions, in character, in the pursuits of the intellect; and there is the beauty of the virtues. What loftier beauty there may be, yet, our argument will bring to light... [2]