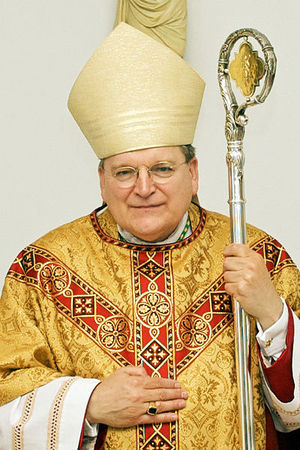 Raymond Leo Burke is the former Archbishop of St. Louis who served as the highest ranking American clergyman in the Catholic Church, holding a position in the Vatican that is comparable to the Chief Justice of the United States Supreme Court, until he was reassigned by Pope Francis. In late 2014, Cardinal Burke expressed criticism of the direction, or lack thereof, of the Church.

He is a strong advocate of moral principles, such as pro-life and traditional marriage.

Fr. Burke was born June 30, 1948 in Richland Center, Wisconsin to Thomas and Marie Burke. He attended elementary school at St. Mary School in Richland Center, secondary school at St. Joseph School in Stratford and high school at Holy Cross Seminary in La Crosse, Wisconsin. Burke attended college at Catholic University of America in Washington and attended Pontifical Gregorian University in Rome after which he was ordained to the priesthood by Pope Paul VI on June 29, 1975, at the Basilica of St. Peter.[1] Fr. Burke returned to Wisconsin as associate rector of the Cathedral of St. Joseph and teacher of religion at Aquinas High School in La Crosse. In 1980, Father Burke returned to Rome to study Canon Law at Pontifical Gregorian University and, in 1989, Pope John Paul II named him Defender of the Bond of the Supreme Tribunal of the Apostolic Signatura, the first American to hold this position on the Church’s highest court. Bishop Burke was ordained to the episcopacy by Pope John Paul II on January 6, 1995, at the Basilica of St. Peter and became Bishop for the Diocese of La Crosse on February 22, 1995.

Fr. Burke sent private letters to three local politicians advising them that they risked their spiritual wellbeing by not giving up their pro-abortion voting patterns. The letters were leaked to the Milwaukee Journal Sentinel and published with accompanying criticism. He proceeded to put additional concepts into practice. The following week, Fr. Burke published more letters in which he advised the Central Wisconsin HIV/AIDS Ministry to withdraw from an annual AIDS fundraising due to pro-homosexual groups participation. In a hail of criticism he said, "I have no regret whatsoever. It was my duty as bishop.... " [2] Shortly after, Bishop Burke was informed that he had been appointed Archbishop of St. Louis. He was appointed Prefect of the Supreme Tribunal of the Apostolic Signatura by His Holiness Pope Benedict XVI on June 27, 2008.