James Richard "Rick" Perry (born March 4, 1950) was the 14th United States Secretary of Energy, serving under Republican President Donald Trump. Previously, he served under a variety of positions, most notably as the Republican Governor of Texas from December 21, 2000, when he succeeded then-Governor George W. Bush, until January 20, 2015. He was elected to full four-year terms in 2002, 2006 and 2010, when he easily won an unprecedented third full term after defeating—by a wide margin Unitedk State Senator Kay Bailey Hutchison in the GOP primary in March and then the Democrat former mayor of Houston, Bill White, in the general election. When he stepped down in 2014, Perry had the longest tenure of any Texas Governor. 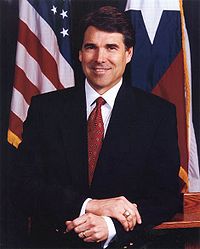 A native of rural Haskell, Texas, and a 1968 graduate of Paint Creek High School (both towns are north of Abilene), Perry obtained a degree in animal science from Texas A&M University in College Station. He is a former Democratic member of the Texas House of Representatives, having been first elected in 1984. He switched to Republican affiliation in 1989. The next year, he was elected Texas Agriculture Commissioner, having narrowly unseated the two-term populist Democrat Jim Hightower, a vocal supporter of Jesse Jackson in Texas. That position is now filled by the Republican Sid Miller, a candidate for reelection in the general election on November 6, 2018. Perry won his first full term as governor in 2002, when he defeated the wealthy Laredo businessman A. R. "Tony" Sanchez by a three-to-two margin. He was reelected to another full term in 2006 with only 39 percent of the vote because the other 61 percent of the ballots were split among other rival general election candidates, including a former Republican state comptroller, Carole Strayhorn of Austin (Perry's rival who ran as an independent) and legendary Texas musician Kinky Friedman.[1]

Perry's brother-in-law, the brother of Anita Thigpen Perry, is Joseph E. Thigpen (born ca. 1946), a former district attorney and county attorney in West Texas. In 1994, Perry, reelected as the agriculture commissioner, asked incoming Republican Governor George W. Bush to name Joseph Thigpen to a vacancy on the state appeals court in Eastland County, Texas. Acting on a check into Thigpen's record by political advisor Karl Rove, Bush declined to appoint Thigpen to the bench. As a county attorney, Thigpen had been criticized for not being available when the commissioner's court needed his counsel. In 1998, Rick Perry became lieutenant governor in the second George W. Bush gubernatorial term. The Thigpen appointment controversy has been mentioned as a possible cause of a potential breach between Governors Bush and Perry.[2]

In August 2011, Perry entered the 2012 race for President. Perry dropped out of the race in January 2012 and supported Newt Gingrich.

Perry unsuccessfully ran for the Republican nomination in the 2016 presidential election.[3] He announced his withdrawal from the presidential race in September 2015 during a speech at the annual conference held by Phyllis Schlafly.

In 2007, Perry attempted to mandate by executive order a requirement that the HPV vaccine be administered to young girls as a condition of entering school. Defiant, Perry then felt he had no choice but to sign a bill overriding his mandate because it had been passed by a huge majority in both houses of the legislature.

He was criticized by the Dallas Morning News for traveling to Turkey in early June 2007 to give a speech to a "secret forum" on the topic of federalism, a topic on which Perry has little-established expertise.[4]

In 2009, Perry drew fire for numerous statements that suggested Texas' legal right to secede from the union if it wanted to.[6] While such statements were viewed with favor by the Texas Republican Party and helped him win the 2010 gubernatorial election, they were supposed to haunt his 2012 election prospects.

Perry's prayer rally scheduled for August 5, 2011 was strongly attacked by the left as a violation of the so-called "separation of church and state," which is actually a liberal misreading of the United States Constitution.[7] According to investigative reports by the Houston Chronicle, Perry's tithing and charitable giving combined make up a paltry 0.5 percent, or $750 of annual gubernatorial compensation of $150,000 annually, excluding his generous housing allowance.[8] His office's response to the report is that "he refuses to talk about his faith."

His key positions include rejection of the theory of man-made global warming, equal time for creationism and evolution in schools, pro-Second Amendment, skepticism about the sustainability and constitutionality of Social Security, and pro-life with exceptions, although he ended up opposing exceptions for rape and incest. Perry supports death penalty and the decriminalization of marijuana.[9] He supports educating the children of illegal aliens.[10] Perry made a pledge to oppose same-sex marriage.[11]

After his statement that Turkey is ruled by Islamist terrorists, NATO criticized him.[12] During the Syrian Civil War Perry supported a No-Fly Zone.[13] He is a strong defender of Israel.

Perry has had an inconsistent policy concerning illegal immigration, rather than one of strong opposition.[14]