The son of Samuel A. Caldwell and the former Alice Jeter, Caldwell was born and educated in Mooringsport in Caddo Parish.[1]

He then attended Louisiana Tech University in Ruston. For nine years he was employed by Kansas City Southern Railway in the accounting and auditing departments. He worked seven years for Shell Oil Company, part of that tenure as the assistant superintendent of the land department. He was thereafter an independent oil operator affiliated with the Louisiana-Arkansas division of the then Mid-Continent Oil and Gas Association.[2]​

From 1932 to 1934, Caldwell served on the Caddo Parish Commission, then known as the police jury, the parish governing body akin to county commissions in other states.[1] He was elected to four-year terms as mayor in 1934, 1938, and 1942. In his last campaign for mayor in 1942, he defeated by 211 votes fellow Democrat Dolph Frantz, a top official in the since defunct newspaper, the Shreveport Journal. [3]

Mayor Caldwell worked to merge the municipal and parish boards of health into one entity and oversaw the stocking of Cross Lake, the city's water supply.[4][5]​

In the Caldwell administration, the city obtained the former United Service Organization center in Princess Park, which later housed the Shreveport Regional Arts Council until it was destroyed by arson. Caldwell set the eight-hour day for city fire and police personnel and lobbied for frequent pay increases for these employees. He worked to obtain $2 million in funding for the city's first low-income housing and established public dental, prenatal, and maternity clinics without increasing taxes to do so. Caldwell was responsible for the municipal acquisition of Querbes Park, named for former mayor Andrew Querbes, and the establishment of Ford Park, named for former mayor and commissioner John McWilliams Ford.[6]​

When he declined to seek a fourth term in office, Caldwell said that he had "tried sincerely to be a good mayor. I will be just as interested and solicitous of the welfare of the city ... as a private citizen as I have been as mayor."[6]​

​ In 1944, Caldwell campaigned unsuccessfully for governor against former Shreveport Public Safety Commissioner (a position since abolished) Jimmie Davis. Caldwell's choice for lieutenant governor was state Senator Frank B. Ellis (1907-1969) of St. Tammany Parish,[7] who a decade later waged an unsuccessful challenge to U.S. Senator Allen J. Ellender. Caldwell received just under thirty thousand votes in the gubernatorial primary. Leander Perez, boss of the Louisiana Delta from Plaquemines Parish, endorsed for governor "either" Caldwell or Lewis Lovering Morgan (1876-1950) of Covington in St. Tammany Parish. At the time, Perez had a personal dislike for Davis and outgoing Governor Sam Houston Jones of Lake Charles, who covertly favored Davis. Morgan was the gubernatorial running mate of former Governor Earl Kemp Long, who was seeking the office of lieutenant governor that year. Others who sought the governorship in 1944 were colorful state Senator Dudley J. LeBlanc of Abbeville in Vermillion Parish and U.S. Representative James H. Morrison of Louisiana's 6th congressional district, a resident of Hammond in Tangipahoa Parish, names widely known across the state at that time. Davis led the balloting and then defeated Morgan in the runoff election.[8]​

In effect, Davis and Caldwell had been city council members elected at-large in the early 1940s, when Shreveport operated under the city commission government, changed in 1978 to the mayor-council format.[4] Caldwell had urged that the city switch from the city commission to the mayor-council format, a move not undertaken until 1978, long after his death.[6] After he dispatched Morgan on the theme of "Peace and Harmony," Davis was unopposed in the general election, as was then the political custom in Louisiana. After a twelve-year hiatus, Davis returned to serve a second gubernatorial term from 1960 to 1964[8]​but failed in a third-term comeback bid in 1971.

In the campaign, Caldwell argued for state assistance to returning veterans from World War II. He also stressed his support for states rights through the Tenth Amendment to the United States Constitution.[2]​ 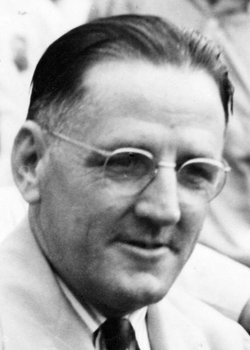 In 1914, Caldwell married the former Anna Pauline "Polly" Owen (1894-1966), originally from Delhi in Richland Parish. She was an avid gardener and like her husband an advocate for veterans' issues.[2]​

The couple had one child, Betty Ann Caldwell Morgan Burke (1923-2015), whose first husband, John Morgan, died in 1959. She then wed the late Milton Pope Burke. Betty's daughter and the mayor's granddaughter,[10] Polly Morgan Decker Griffith (1951-1992), suffered from a mental illness for which experimental drugs were unavailable because they had not been approved by the Food and Drug Administration.[11] The Caldwells were members of the First Presbyterian Church. He was also a member of the Masonic lodge.[2][4]​

Caldwell died in Shreveport of an unspecified lung ailment at the age of sixty, almost five months after he had been treated at the Mayo Clinic in Rochester, Minnesota. He is interred along with other family members at the Masonic Rest Section of Greenwood Cemetery in Shreveport.[1][6]​